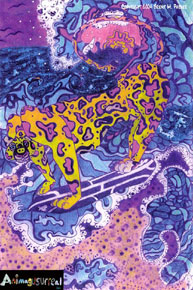 Brent M. Parker, also known as Animagusurreal, is a furry artist based on the Central Coast of California that is known for his psychedelic and - as his name suggests - surreal techniques. His subjects are usually tigers and other big cats, fantasy creatures like gryphons and unicorns, and artwork featuring a superhero known as Remi Vitoux.

Remi Vitoux is a beaver furry created by Animagusurreal, he lives in New Orleans and is sensitive and rebellious artist who specializes in wood sculpture (being a beaver of course). Little does everyone know though, Remi is also the superhero "Dammage" who uses his wood-sculpting and dam-building powers to fight the forces of evil... a strange and surreal superhero fitted for a strange and surreal line of artwork. There are several other characters who appear in pictures alongside Remi, most prominently Iris Deck, a.k.a. Identity, the superheroine bloodhound.

Another occurring theme is a series of feral tigers done for a graphic novel Camo. The tigers are from India but possess magic powers and can transport to a number of places around the world.

Camo: a magical tiger odyssey is a graphic novel-in-progress currently being created by Brent M. Parker, a.k.a. Animagusurreal. Anthropomorphisization is about on the level of The Lion King - the characters are sentient, but are quadrupeds, live in the wild, and do not wear clothes or use technology. Early pages are available for viewing on his website.

Camo is a middle-aged tiger living on an island in a river in the Indian jungle with his three nearly-grown cubs, whom - contrary to general male tiger behavior - he has raised. He constantly wards off invasions of his territory by rival tigers - including his ambitious young Neighbor - with nothing more than his calm, confident presence.

Camo's only son, Young Camo ("Y.C.") is a rare white tiger, which makes it more difficult for him to blend into his surroundings. Camo insists that the happy-go-lucky Y.C. toughen up in order to compensate for this disadvantage, and the discussion escalates into an argument, and then a fight.

As Camo is about to pounce on Y.C., the younger tiger reflexively uses his hitherto-undiscovered magical powers to send his father to Siberia.

Y.C. embarks upon a quest to find his father, master his powers...and perhaps discover his own territory on the way.

Meanwhile, Camo must learn how to survive in someone else's territory.

This series of artwork features characters from Animagusurreal's fantasy prose-novel-in-progress, Escapia, which takes place in a Rennaisance-era kingdom where magic is becoming industrialized and humans and magical creatures must learn to live alongside each other. The main character is Sequiel, a human quest guide, but much of the artwork in the series features Ballad Quill, a cheerful gryphon musician.

In 2009, Animagusurreal began drawing artwork in the muscle furry subgenre, in a relatively realistic style. A series of pictures in this style centers around a battle between a doberman superhero named Dobes "Guard Dog" Gillis, who has a super-bite, and a skunk villainess named Zoria Qumica, who has chemical-based powers via her spray. Zoria's vampire bat accomplice, Johnny Drac, has also been introduced, with more characters planned for the near future. The artist also continues doing images in his "regular" surreal style.