Calypso Husky is a female furry from Lexington, KY. In her human form, she is known as Chelsey L. Boston, a graphic designer, musician, comedian, artist, amateur magician, etc. She is Co-Founder of Kentucky Anthropomorphic Society (KYAS). She has two fursonas. 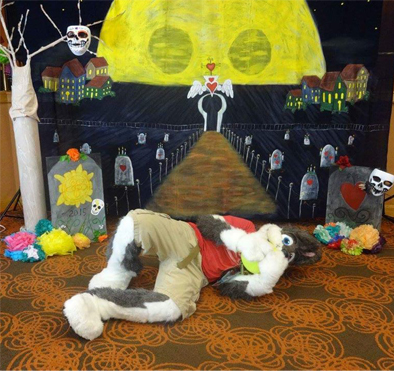 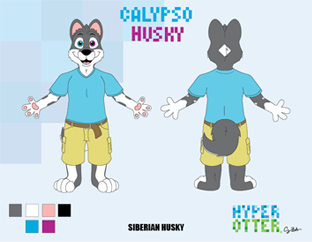 Reference Sheet for Calypso Husky as created by Hyperotter Designs.

The first fursona is a grey and white male Siberian Husky who dons the name Calypso. He is distinguished by his eye colors (his right eye is blue and his left eye is purple) as well as a few geometric deviations in his fur pattern at his elbows and a diamond-shaped patch of white fur on the back of his head (which is derived from the Ace of Diamonds in a standard playing card deck). Calypso is a wild child with a big mouth and a combination of crude and slapstick sense of humor. He is an amateur magician and also loves to dance and drum. He also cosplays as Captain Calypso, a Chief Medical Officer for Starfleet, on occasion. 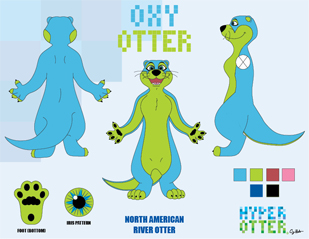 Reference Sheet for Oxy Otter as created by Hyperotter Designs.

The second fursona is a female North American River Otter named Oxy. She is distinguished by her light-blue and light-green colored fur as well as a tri-colored iris on both eyes. She wears a tye-dye bandana. This character is more representative of Calypso's sweeter and more reserved, feminine side. Oxy doesn't talk, but squeaks like many otters. She is often much shyer (and nicer) than Calypso, but in certain situations she can be hyper or a bit sassy (she even has a drink named after her!). She, too, likes to dance, but doesn't take it as seriously as Calypso does. She cosplays as a Hogwarts Student on occasion.

Calypso Husky's 1.0 partial was finished in January 2014 and made his debut at Lexington Comic Con, where he cosplayed as Captain Calypso. Since his initial construction he has undergone several re-makes with version 4.0's creation in 2017. Though 4.0 exists, you will rarely see it due to design flaws that make wearing it for an extended period of time difficult.

Oxy Otter's 1.0 full suit made her debut at Fur Reality 2014. Oxy has since been commissioned as a full digi-grade suit by Coffee Costumes, owned by Coffee the Rat of Indiana.

Calypso has been a member of the Furry Fandom since early 2014. She started off by attending a couple of smaller events. Over time, she became involved with planning events for KYFurs before the inception of KYAS. She has been involved in the creation of three of Kentucky's most popular (current) furry events.

On top of being Director of Marketing at The Menagerie, Calypso recently joined the staff at IndyFurCon as a Registration Staffer.

KYAS was formed as a 501c7 non-profit organization in 2016. Calypso formed this organization with partners Inu Lesedi and Lex Jaeger in order to have a backing organization behind The Menagerie, a continually growing event. Forming the organization allowed for negotiation with prospective hotels while searching for a place to hold the event as a Mini Convention.

To date, KYAS hosts 3 annual sanctioned events: FurStrike, the KYAS Annual Cookout and The Menagerie The organization has over 100 members.

Introduction to the Furry Fandom[edit]

Calypso was unaware of the existence of the furry fandom until the summer of 2014. She was considering the idea of creating her own mascot costume to wear in support of her brother's high school marching band. During her research into mascot creation/construction, she came across the furry music video "Good Time", starring Dancing Duke and Sparky. She was hooked from there; she enjoyed watching videos of different conventions and fursuits, and wanted to join in the fun.

Calypso made the decision to create a fursuit, and to have it done by Halloween 2013, but the deadline was not made. The fursuit was constructed between July, 2013, and January. 2014.

Calypso is active in the KyFurs regional group. She is an event planner as well as an administrator for the KYFurs website.

While Calypso is very active in her local fandom, she doesn't often attend conventions. She goes about under the hope that this will change, but for now she is content with the occasional appearance.

She unsuccessfully tried out for the Furry Dance Competition at Furry Weekend Atlanta 2015. She also did an open-mic bit at Fur Reality 2015.

HyperOtter Designs is the brand of merchandise created by Calypso. The name and colors are derived from Oxy Otter, as Oxy is the face of Calypso's crafty side. Calypso takes commissions for digital and traditional furry badges. She also specializes in perler bead art, t-shirt graphics and jewelry creation.