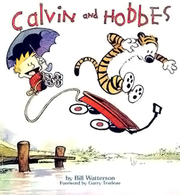 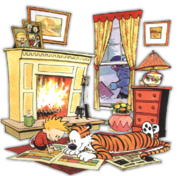 The two main characters (L. to R) , Calvin and Hobbes.

Calvin and Hobbes was a regular syndicated comic strip created by Bill Watterson and ran from November 15, 1985 until December 31, 1995. The strip, notable for its artistic and philosophical content, was wildly popular with comic readers throughout the United States and still maintains a loyal following to this day.

Calvin and Hobbes is arguably not furry because only one half of its pair of title characters is an animal, although the animal in question is an anthropomorphic tiger.

An inspiration to others[edit]

A number of other comics owe a lot to Watterson's work. Among them are: Tommy and PJ, Whatever USA, FoxTrot, Sinfest.