Califur 4 (aka. CaliFur.IV) was held May 15-18, 2008 by FENEC Adventures. The "Steampunk" theme for the 2008 gathering was revealed on the last day of Califur 3, when early pre-registration was opened for the following year. There were 587 registered attendees.

The convention was held at the Hyatt Regency in Irvine, California 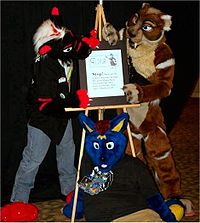 "STOP! There are no Califur attendees beyond this point. Please keep out and let the other hotel guests enjoy their space."
The hotel received complaints from non-Califur guests, namely the members of a traditional Japanese wedding party. This resulted in Califur trying to be helpful and erecting the sign specified to the left to encourage furs to avoid the wedding party. The hotel also used pipe and drape to try to block off areas for the offended wedding party, which resulted in a "neutral zone" between the two events. Many con attendees complained to convention staff, who promised and succeeded in getting a new hotel in the following year.

While a bit extreme in the case of this particular Califur, sometimes for reasons beyond the control of the convention, the hotel will book incompatable parties along side furry conventions. This particular incident happened to be the worst, and the hotel was less willing to work through it with Califur because the Japanese wedding party paid more money than the entire Califur hotel bill, for 1/10th the space.