CaliFur, or just CF, was a convention that succeeded the first furry convention ConFurence as the annual furry event of Southern California, USA. It was organized by FENEC Adventures.

Califur's reoccurring events included a pet auction, cabaret, live DJ'ed dances, table-top gaming and video gaming, fursuit parade, P.A.N.T Panel,[clarify] fursuit panels and Califur After Dark, a set of events with an adult 18+ attendance. Califur had also expanded its registration to include various price ranges for those under the age of 17 to give them a price break.

Califur was on hiatus since April 23, 2018[1] due to a need to find a new home after harassment in 2017 led to a $25,000 security surcharge and subsequent hotel contract cancellation.

Promises of returning back in 2019 were made ("Califur 3: The Year of the Phoenix"),[2] with some of the con's staff[who?] offering refunds, but also asking that year's already registered attendees for permission to use their refunds to finance next year's event, with some people[who?] demanded refunds anyways, with a few never receiving them at the end.[citation needed] Califur never recovered and eventually called it quits in 20??,[clarify] with no official explanation given.

FENEC ("Furries Enjoying the Natural Environments of California") was conceived by Robert "Alohawolf" Johnson, Dawn Britt, and Dennis Carr with the initial idea of having a furry-themed campout. While riding home from southern California FurBQ, Dawn had commented to Dennis and his then-wife, Karmin, about the lack of other camping events such as Feral! in Southern California. Dennis pointed this out while chatting on the Furnet IRC Network, and Robert took the lead in starting an organized event.

As the campout was being planned, additional staffers including Glen Wooten, Zsanene "Zee" Stevens, Trapa, Drewkitty along with ConFurence co-founders Mark Merlino and Rod O'Riley were brought on board. With the demise of ConFurence in 2003, Mark and Robert expressed a desire to see a regional convention maintained in Southern California. The decision was made in early autumn of 2003 to plan a traditional hotel-based convention to succeed ConFurence 2003 with Califur 0 the following year. Thus the campout idea soon evolved into a hotel-based convention instead. FENEC still retains its name despite this, as it is part of Califur's history.

The first Califur was held May 28-30, 2004 at the Atrium Hotel in Irvine, California. The theme was The Adventure Continues to indicate a transition between ConFurence and the new convention Califur. There were five Guests of Honor: 2, The Ranting Gryphon, Foxxfire, Topfox, Cataroo, and Jefferson P. Swycaffer. Though original expectations were modest, this inaugural dry run had an unexpected 326 attendees, over five times that of Confurence 0.

Between 2004 and 2005, there were many staffing changes, but significant growth was achieved in both room registrations and attendance.

The second Califur was held May 20-22, 2005 at the The Holiday Inn in Costa Mesa, California. The theme was Welcome to the Islands. The Guest of honor was Brian Wear. There were 383 attendees, a 15% gain over the previous year.

After 2005, there were some minor staff changes, with Zsanene "TigerEyes" Stevens being selected by the FENEC board to succeed original Califur founder Robert "Alohawolf" Johnson Jr. as the new chairperson.

The third Califur was held May 5-7, 2006 at the Holiday Inn in Costa Mesa. The theme was Pirates. The Guests of Honor were Mitch de la Guardia and Lisanne Norman. There were 434 attendees.

The fourth Califur was held May 4-6, 2007 at the Holiday Inn in Costa Mesa. The theme was Your Favorite Furry Villains (Scar, Professor Ratigan, Don Karnage, Jack Salem, Bun Bun, and many more). The Artist Guests of Honor were Balaa and Roz Gibson, and the Musical Guest of Honor was Marc Gunn, creator of Irish Drinking Songs for Cat Lovers. There were 496 attendees.

The 2006 Ursa Major Awards was held on the opening night of the convention. The Dealers Den spaces were sold out at least a month before the event, indicating that the con had again outgrown its venue.

The fifth Califur was held May 15-18, 2008 at the Hyatt Regency in Irvine, California. The theme was Something Steampunk This Way Comes. The Guests of Honor were Kitsumi and Keovi. There were 587 attendees.

The sixth Califur was held June 5-7, 2009 at the Irvine Marriott in Irvine, California. The theme was On Safari. The Guests of Honor was 2 The Ranting Gryphon and Bonnie Callahan, and the Guest Artist was Fossil the Undead Anthrosaur Artist but he didn't show up due to being unable to travel across the country. There were 720 attendees.

The seventh Califur was held June 4-6, 2010 at the Irvine Marriott. The theme was Fabulous Furry Funnies!, which was a comic strip-themed convention. The Comic Strip Guest of Honor was Amber M. Williams, and the Artist Guest of Honor was Kythera of Anevern. Fursuit maker Lucky Coyote of Don't Hug Cacti Studios was a Special Guest. Fossil was asked to come as the GOH for Califur 6, but again didn't show up. As an addition to the Califur program, there was a Furry Night Live (FNL) performance. KROQ, a Los Angeles rock radio station shared the convention space with the hotel for the first time. There were 851 attendees.

The eighth Califur was held over June 3-5, 2011, at the Irvine Mariott. The theme was "Post Apocalypse". The Guest Of Honor was Mitti (previously known as Touch My Badger). Radio station KROQ shared the convention space with Califur once again, since KROQ's Weenie Roast is at the same time of year. Many of the bands playing the Roast were staying at the hotel. There were 919 attendees.

The ninth Califur was held over June 1-3, 2012. The theme was The Roaring Twenties, and the Guest Of Honor was Mochi. With 950 attendings, Califur announced that if they could reach over 1,000 they would extend the number of days that Califur runs.

The tenth Califur was held May 31st, June 1st, and 2nd 2013. The theme was Virtual Worlds. The Artist Guest of Honor was NecroDrone and the writer Guest of Honor was Maxwell Alexander Drake. Califur reached its goal of 1,000 attendees and exceeded the number with 1,178. Califur announced that it was in negotiation with Marriott Irvine regarding the extension of Sunday to a full day. Many new programming additions appeared on Califur 2013's schedule including an After Dark set of tracks for those 18 and over.

The eleventh Califur was held May 30-June 1, 2014.[3] The convention's theme was Hollywood - Past and Present.[3] Califur announced that Greg Weisman, creator of Disney's Gargoyles would be a special guest;[4] with Dustmeat being the artist Guest of Honor[5] and Beastcub the Fursuit Guest of Honor.[6] The attendance was 1,206.[7]

The twelfth Califur was held June 5-7th, 2015 at the Irvine Marriott in Irvine California. [3] The convention's theme will be Anime & Kemono. The artist guest of honor was Zhivago D with musical and industry guest of honor Amadhia Albee. Califur had a total attendance of 1317 and announced that they were moving to the Los Angeles Fairplex for 2016.

Califur 2016 was the thirteenth iteration of the Califur convention. It was held over June 3-5, 2016[8] at the Fairplex Sheraton Hotel and Convention Center in the city of Pomona in Los Angeles County, California.[9] There were 1451 attendees.[10]

The theme for Califur 2016 was High Fantasy & Renaissance Faire: The Quest for the Dragon Sword.[9] The Guests of Honor was fandom artist Sixth Leaf Clover and game industry artist Terrie Denman.[11][12] 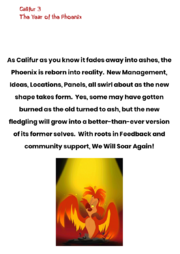 The fourteenth iteration of Califur, Califur 2017 was held May 19-21, 2017,[13] once again at the Fairplex Sheraton. Initially scheduled for June, the date was rescheduled for May to give a wider breadth between Califur and that year's Biggest Little Fur Con.[citation needed] Attendance was 1393.[14]

The expected fifteen iteration of Califur 2018 (also known as Califur 2.14)[clarify] was cancelled on April 23, 2018[1] due to a loss of venue and the inability to secure a new one when the hosting venue, the Fairplex Sheraton, cancelled their contract due to the "threats and protests"[15] that resulted in a major increase in security costs to the convention in 2017.[16]

Califur 3 (no date numerals were used for that year's venue), going with the theme "The Year of the Phoenix", was to be, hopefully, the 2019 occurrence of the promised con.

But besides the April 2018 announcement of Califur 3[18] on their website, a few posts in social media,[19] and a booth at San Diego Comic Con,[20] all official chatter ceased, with 2019 coming and going, with no event taking place.

No official comms transpired in 2020 about Califur.

A train trip was organized for a few years by co-chair Trapa to help Vancouver and Seattle area furries make the long journey to Califur in Southern California.

Califur Diego was a "furry artist reception" furmeet held during the annual Comic-Con International in San Diego, California. This event was inspired by the now-defunct CritterConDiego which also scheduled its events in the evening after the Comic-Con dealer rooms were closed. It was most recently held in 2007 at the Horton Grand Hotel.

Califur Diego 2007 featured a new, two-night format and a smaller room. The event was canceled for 2008 due to a lack of funding.