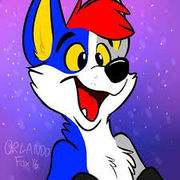 Caffeine Fox is in the US Armed Forces. He is married to Caleb, who can be found on Twitter. He spends a good amount of time yapping at chickens and digging holes.

Caff began his YouTube channel on January 8, 2017, and as of May 11, 2020, has over 16.5K subscribers. He sometimes does collaboration streams with fursuiters, including a bat named Flittermaus. Colonel Cluckers, Caff's little-stuffed chicken, either joins him or makes a special appearance in some videos and streams. Caff does live-streams every Thursday, and posts episodes of Caff's Corner, his series of random videos, every Friday. His face can only be seen in his Furry Relationship Advice video.

Caffeine Fox joined the furry fandom in 2016. His fursuit was made by Dream Machine Costumes.

Caffeine's fursona is a fox with a design based off of Red Bull, because energy drinks were one of the only things that got him through long hours of military training. Matching the colors of a can of Red Bull, he has a grey left leg and right arm and a blue right leg and left arm. The hair on top of his head is a bright red, and he has a white center torso and white facial markings. Half of his face is grey while the other half is blue. The inside of his ears are yellow, as are his sclerae. He has black paws and red paw pads. He also has a blue tail with a red and yellow ring and a white tip. Finally, he has an incredible amount of cheek floof and two little pointy teeth that make him "fur-ocious."