His fursonas are a lion/domestic house cat mix named Pip[2] and a farble[clarify] named Whitey.[3]

COMMONER is an independent and non-contracted SFW and NSFW human/furry artist. 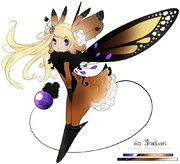 A farble (noun) Pronounced [fahr-buh l], rhymes with "Marble", is a small mythological bipedal creature. 7cm-14cm (2.7"-5.5") tall. The marble holds the creature's spirit and the tail acts as a bridge between the spirit and it's sonafication [image of creature] within a tangible, breathing, feeling form. The Farble is 100% covered in Fur-Feathers. Furfeathers have a carbon shaft that sprout extravagant patterns and colors of fur. Farbles are known as the furry creatures of the fairy world.

Creator of Farbles: Oliver B. Mapes (artist name COMMONER) May 20th 2015 288+ characters have been made by the creator. All characters have a unique coloring and given name.

Farbles are a closed concept/closed species copyrighted by the original designer. You cannot make your own.

Pendant Farbles also known as the children of the Farble world are the only type of Farble subject for self creation. A maximum of 2 can be made and designed by another party but cannot be sold or commissioned to be made. All Pendant Farbles must be free designs and kept within the community. Please see Field Guide for details on creation and terms.

In real life, COMMONER has a daughter and partner.

COMMONER graduated high school in early January 2012, and graduated at the Cincinnati Bartending School in 2016.

He has a pet Hoffman's Conure named Mori and a large saltwater fish/reef tank.