CBRFUR was a small furry convention based in Australia, and hosted (last in 2018) at the Pavilion on Northbourne hotel, with a focus on trips out to regional landmarks for fursuit photography.

CBRFUR was originally a "fur car-meet" hosted at and with accommodation at Capital Executive Apartments on Northbourne Avenue.

CBRFUR was based around several different activities involving cars and fursuiting. Previous activities have included:

The registration fee includes some food and use of the event space as well as a badge and a lanyard; external venues and parking often cost extra.

CBRFUR5 took place on 14-16 November 2014.[6] This was the first event to take place at the Pavilion on Northbourne.

CBRFUR6 took place on 24-26 July 2015.[7] Events included trips "Group shot from the arboretum at CBRFUR6 c:" - CBRFUR, Twitter (16 August 2015)</ref> and Tidbinbilla.[8] as well as a night shoot at Telstra Tower.[9] The "Titanium Ultra Mega" registration level included a logo'd T-shirt, sticker, and the opportunity to have your own picture on your badge.[10] There were at least 24 fursuiters.[11] 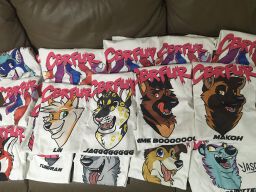 CBRFUR7 took place 10-13 June 2016.[12] 68 indicated that they "went" on Facebook, and there were at least 21 fursuiters.[13] Events included a lunch at Brodburger, a repeat of the Friday-night photoshoot up Telstra Tower, BBQ at Cotter, a visit to the National Gallery of Australia,[14] a trip to Tidbinbilla,[13] playing with HTC Vibe VR sets,[15] and fursuit games.

The customizable badges returned for "Gold level mega sponsor" registration, along with a T-shirt with the CBRFUR logo and a picture of tails,[16] optionally printed with a fursona name;[17] however, custom T-shirts with headshots created by Lady Rain (WinterSnoWolf) combined with the CBRFUR logo were created for "Carbon super mega ultra black titanium" sponsors.[18] A collection of headshots was also added to the lanyard.[19]

CBRFUR8 took place 11-13 November 2016 at the Pavilion on Northbourne Hotel.[20] Scheduled events included a trip to the Australian National Botanic Gardens, a lunch at the Cotter Reserve, a visit to Tidbinbilla, and a fursuit walk in the Cockington Green miniature village.[21][22]

As before, a registration package option featured individual headshots on t-shirts; this was replaced in subsequent years by a universal CBRFUR design.[23]

CBRFUR 2017 took place 17-19 November 2017 at the Pavilion on Northbourne Hotel.[23] Scheduled events included lunch at the Capital Brewing Co., a visit and fursuit walk at Questacon, lunch at the Cotter Reserve and a visit to Tidbinbilla, socializing and VR games.[24]

CBRFUR 2018 (CBRFUR10) took place 16-18 November 2018 at the Pavilion on Northbourne Hotel.[25] Scheduled events included fursuiting and photography at Telstra Tower, BBQ lunch at the Cotter Reserve, a trip to the Googong Reservoir, socializing and VR games, and bean bags.[26]

CBRFUR registered the business name Harbour City Fur Con from 28 July 2016 to 7 December 2017, and is marked as owning the copyright on furcon.com.au which hosts both events.

The organizers have represented CBRFUR as part of a wider group, Furries Under the Radar, including the organizers of more car-centric events FURRED and Smash-Up.