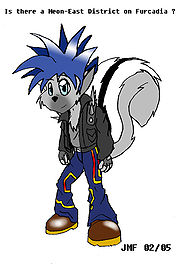 ButtBadger, also known as Max le Fou, is a skunk-wolf hybrid from France. He works as a freelance computer technician.

Although most of his works are hand-drawn, he has also tried his hand at flash animations. He did a furry 'remake' of an other popular memes, Badger Badger Badger, named 'ButtBadgerPhone'. He is working on his own fursuit. He likes everything Japanese, is very passionate about every kind of anthropomorphism, and is mated to Jade Sheppard. He is a fan of Tiny Toon Adventures and especially of Fifi le Fume.

His character (fully named Mickaël Junior ButtBadger) is an anthropomorphic wolf with some differences, including his big fluffy tri-coloured skunk tail, his fur color, his short muzzle and his big footpaws. He has the ability to spray different kind of odors. Like Pepé le Pew, he sometimes adopts a French accent when he talks in English.

ButtBadger is active on Second Life as Buttbadger Mirabeau since 2005.

He is one of the main moderators of the sim EuroFur Exodus (Extra), a French and European themed sim for furries; he works as an occasional DJ at Rainbow Tiger aalso makes various stuff.