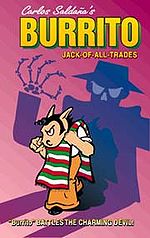 Burrito is an anthropomorphic burro character created by Carlos Saldaña in 1990. From 1995 to 1996, he appeared in the self-published comic book series Burrito: Jack-of-All-Trades from Accent! Comics. His adventures range all the way from Europe in 1492 to Tijuana in 2099.