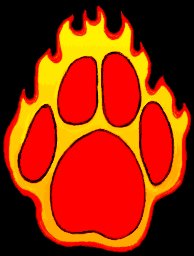 Of the four statements published by the group, two were by Squee Rat, one was by Peter Schorn (Hangdog), and the last was by Mike Beebe (as shown at http://burnedfur.mv.com/main.html). In point of fact, Eric's personal commentaries on the fandom as a whole were well-known for years before Burned Fur existed.

Throughout the Manifesto, Squee Rat made clear that personal fetishes and unusual lifestyle choices were not a problem if kept as a private matter, in private areas and within the law; she opposed the public flaunting of what most would consider socially-unacceptable behaviors. In particular, she derided the small minority of fans who insisted that a person could not be "furry" without, for example, having an "animal spirit" or practicing Veganism.

By about 2001, the Burned Furs had faded into history, many of them having left furry fandom altogether, and the counter groups formed to oppose them became defunct by default.