Bunnicula: A Rabbit-Tale of Mystery 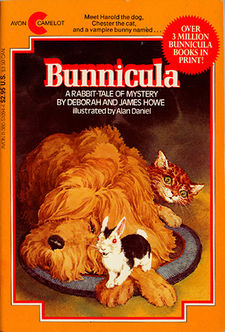 Bunnicula: A Rabbit-Tale of Mystery is a novel by Deborah and James Howe, and illustrated by Alan Daniel. Howe introduces the book as actually having been written by one of the main characters who showed up with a manuscript one night.

This book is intended for readers 8-12 years of age, or roughly grades 3-6. It is most commonly available in the chapter book format.

The Monroe family returns from a showing of Dracula with a new friend... a black and white rabbit with red eyes that they promptly dub Bunnicula. The family pets, Harold the Dog and Chester the Cat, notice that strange white vegetables start showing up. It's as if they've been drained of blood! Or at least juices. Chester is convinced Bunnicula really is a vampire rabbit and must be stopped before his army of undead vegetables can take over the world.