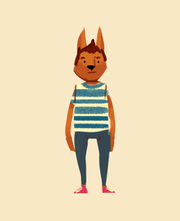 A picture of Ritz, fursona of Artist known as Ritz. Picture is drawn by Ritz.

Ritz Beretta, created by the British artist Ritz, is a furry character and the artist's fursona.

Ritz is a digital artist and inflatable Eurasian brown wolf. He likes Huge Breasts, Huge Muscles, Huge Schlongs, Huge Girth, Just about Huge anything - especially when it gets even huger. As he says: Bigger is always better.

Ritz is a mixed media and digital aritst operating on Fur Affinity, DeviantArt and Blimped, as well as running his own tumblr and twitter pages, either in or out of character.

His real name or details are unknown, in order to continue the mistique of the Ritz character.

Starting his account in April 2006, his work has slowly evolved over time to incorperate everything from photomanipulation, flash animation, and more recently digital painting. As he's continued, his tastes have moved from Breast Expansion and Female Muscle, to Male Muscle, Hyper and Hermatrodite pieces. However, Large sizes and Growth have stayed a constant theme in his work.

Over the years, he's made a small mark on a number of communities, from Macrophile, Amaz0ns and the Process forum, as well as on Fur Affinity with his GrowthAvatar craze.

Ritz continues to produce artwork of pumped up males and females of the furry variety.

As an Artist, Ritz has gone through a number of unique characters over his 6 years working on Fur Affinity. From Female Body-Building wolfesses (the most popular of his designs), A space bat, an engorged deer, and finally a male wolf with a taste for growth.

For all their changes, all the characters at least follow a few things in common. Their backstories, styles, personalities - and of course an affinity for body growth.

Ritz came about as a Sonic the Hedgehog fan character around 1995. Their name and character description was thought up around the theme of the Casino Night Zone, Glitz, Glamour, and, of course the famous hotel of the same name.

The character later evolved up into a female werecharacter, adopting a more furry appearance. Originally she went on Johnny Bravo inspired adventures of finding love--of course failing again and again due to her hairy situation.

It wasn't later, in about 2002, when Gogo really got into the Internet when Ritz slowly evolved to furry body-builder. A number of web comics fueled things which subconscious laid dormant; fetishes, that is. After investing in a wonderful and highly useful scanner in March 2006, it was time to bring Ritz to the masses.

Ritz then went through many more changes over the past few years, from her conception of a Possible Hybrid Alien, to a shape shifter.

Looking to make a character more personal to the artist, Ritz decided to invest time into a more masquline character, while continuing to develop traits that had been established with the previous revision of the character. Originally starting with a space-bat, then a deer, in 2011 the artist decided to scrap the board and return back to his roots - taking a canine character from far before the days of FA and reimagining him as the new Ritz.

A stretchy, animated character, Ritz has the capacity to take on a number of roles - as a natural, human like character, sillier cartoon roles, and fetish inspired scenarios.

What the future holds for the artist and his creation remains to be seen, although we can assume it will at least involve inflation.