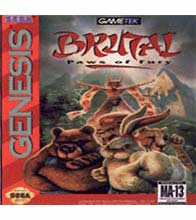 The box of the Genesis version of Brutal

The storyline in Brutal: Paws of Fury was typical for a fighting game of its time: Under the watchful eyes of the malicious Dali Llama, fighters come to Brutal Island to fight for prize money, fame, and recognition.

Dali Llama: He is evil, a llama, and his martial art is "divine"; that is about all that is known about Dali Llama. Dali Llama has two special attacks (Headbutt and Smoke Attack) and two katas (Mind of the Gods and Apocalypse!).

Foxy Roxy: The only female fighter in the series, Foxy Roxy is a fox who is a master of Penjat Silat. She was also notable in that only her backstory indicated her 'real world' name (Idhra Prashmet). Additionally, her story indicated that she had human parents. She wants to use the prize money from the tournament to help children in her home of India. Foxy Roxy has three special attacks (Whiplash Kick, Spinning Attack, and Rolling Attack), and three katas (Kuntao kata, Call of the Lotus kata, and Pentjak Silat Mind Throw).

Ivan the Bear: Performing the roles of both the strong guy and little guy, this bear is nothing more than a brawler and a soldier -- a very strong brawler and soldier. Ivan the Bear has two special attacks (Big Belly Attack and Earthquake) and three katas (Strength of the North kata, Jab Al Nar kata, and Rage of the World kata).

Karate Croc: Although he knows karate and is a crocodile, even less is known about Karate Croc than is known about Dali Llama. Karate Croc has three special attacks (Tail Whip, Torpedo Attack, and Flying Tail Whip) and three katas (Escrima kata, The Swallow kata, and The Path of the Empty Hand).

Kendo Coyote: Student of Tai Cheetah, already well-versed in kenjutsu, Kendo Coyote was a playboy until Tai came into his life. While Kendo is still a bon vivant, and less serious about his studies than Tai would like, Tai believes Kendo will be the one to pass on his legacy. Kendo Coyote has four special attacks (Slam Punch, Headbutt, Cannonball!, and Spinball!) and three katas (The Five Rings kata, Ki Force kata, and Hapkido kata).

Kung-Fu Bunny: After spending over a decade in a Shaolin temple, Kung-Fu Bunny became a master of his martial art. He participates in the tournament for the sake of his monastery. His martial art is relaxed paw kung-fu. Kung-Fu Bunny has four special attacks (Flash Kick, Hi Flash Kick, Double Flash Kick, and Scissors Kick) and three katas (Dance of Death kata, Iron Fist kata, and Devil's Kiss kata).

Prince Leon of Kenya: An African lion, Prince Leon of Kenya enters the tournament to avenge an insult upon him by Kendo and Tai. One of Leon's signature moves, and one of the few ranged attacks in the series, involves him playing a guitar; by summoning speakers to him, he assails opponents with a wall of sound. Leon's other ranged move is a roar. Prince Leon of Kenya has four special attacks (Bite, Swim Attack, Roar!, and Powerchord) and three katas (Wild Side kata, Rage Within kata, and Leon Experience kata).

Rhei Rat: Rhei Rat is the most self-centered of the fighters to be involved in the tournament, being a master of Thai kickboxing who wants a cross-discipline challenge. His sole goal is to live well off of the tournament's prize money. Rhei Rat has four special attacks (Knockout Punch, Frenzy Attack, Face Pull, and Neck Choke) and three katas (Tsumai kata, Lightning Fury kata, and Berzerk! kata).

Tai Cheetah: Although a hermit for most of his life, Tai Cheetah finally struck out to find someone worthy enough to pass his knowledge onto. Instead, he found Kendo Coyote. His martial art is tai chi. Tai Cheetah has three special attacks (Fire Punch, Fire Kick, and Fire Run) and three katas (The Way of the Crane kata, Fist of the North kata, and Divine Wind kata).

The gameplay is generally inspired by Street Fighter and Mortal Kombat, but with a twist: Players begin with only 'basic' moves (movement, three attack types, grapple), and characters have to 'learn' new moves during the single player mode. Every two opponents the player defeats, he or she will go to a tutorial stage to learn a new technique (the first is a taunt that recovers their character's health, followed by a special move or kata in subsequent revisits). By the time the player has fought all the way to the final boss (Dali Llama), he or she may have the character's full repertoire of moves.

- 10 arenas (Aboard the Boat, In the Courtyard, On the Battlements, The Cavern, The Dojo, The Idol, The Landing, The Mountain, The Screen Room, and The Waterfall).

- Exclusive 'Fun Room' feature containing both the 'Brutal Band' to listen to fourteen CD audio tracks and an 'Out-Takes' section with animation tests and deleted characters.

- Input commands for various special moves are different between the Sega CD and Sega Genesis versions (such as the command for Kung-Fu Bunny's Double Flash Kick).

- Passwords are required in order to use special techniques (taunts, special moves, and katas) in both single player and versus modes; each password is thirteen characters long.

- 8 characters (Karate Croc and Pantha have been removed).

- 10 arenas (same as the Sega CD version in name and visual design).

- New voice-overs have been added.

- Pressing the Start button with a six-button controller will pause the game (the Sega CD version could not be paused during fights).

- Music has been added to the 'tutorial' stage.

- A new ending screen has been added.

- Characters can no longer fall off of the sides in 'The Mountain' arena (no ring outs).

- Two speed settings (Normal and Turbo; Turbo is selected by default and the 'Turbo Nutter' speed setting has been removed).

- New sound effects have been added.

- Most of the voice-overs have been removed, with the exception of Foxy Roxy (an audio clip has been added for Prince Leon of Kenya's 'Roar!' technique as well).

- All special techniques are available from the start in single player mode (the player is still instructed on how to perform them during the 'tutorial' segments).

- The original 'tutorial' stage from the Sega CD and Sega Genesis versions has been removed (The Dojo arena is used instead).

- Input commands for special techniques are similar to the Sega Genesis version.

Brutal Unleashed: Above the Claw[edit]

A version of Brutal Unleashed was in production for the Atari Jaguar, but that version was cancelled when the system was discontinued.

- 12 characters (Chung Poe and Psycho Kitty have been added).

- Four gameplay modes (single player, versus, and the two exclusive 'Battle' and 'Practice' modes; Battle mode can be played with one or two players, while Practice mode requires two players).

- Three speed settings (Normal, Turbo, and Turbo Nutter; Turbo is selected by default and the game's overall speed has been slightly increased).

- The original 'tutorial' stage from the Sega CD and Sega Genesis versions has been removed (the Courtyard arena is used instead).

- Input commands for special techniques are similar to the Sega Genesis version of Brutal: Paws of Fury.

- New voice-overs before the fight (new voice for 'Round' and the round number (one, two, three, four, five, six, seven, eight, and nine)).

- All special techniques are available from the start in both single player and versus modes.

- The 'tutorial' stage has been removed.

In 2000, a version of Brutal for the MUGEN game development system was created. Several features (many taken from Marvel Vs. Capcom) were added, including team battles, special moves, custom counters, enhanced attack graphics, and in general, raising its quality to that of a Dreamcast game.

Although these versions of the characters can no longer be found, copies of the original Brutal: Paws of Fury characters are available from various sites.

((EDIT:)) The characters CAN BE FOUND here: http://brutal.harmlesslion.com/