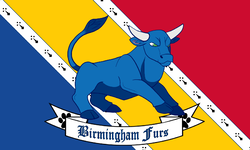 The idea of a monthly Birmingham meet was first raised in 2009.[1] By spring 2010, a regular monthly pattern of meets had been established.

They were originally run by Aigus. By 2011, with the group growing, they recognized a need for an organizing committee, and in October 2011 an informal committee consisting of Camrath, SnuggleBunny, Jasper Wallace and Skyekitty had stepped forward.

The group established The Flapper pub that November as their venue. Satoshi joined the organizers in April 2012 as ‘post meet planner’ and later as ‘pre-meet co-host’. They were joined in November 2012 by Redstar and Bloo Bander. Jasper Wallace left the event staff in December 2012, followed by Camrath, Skye, Satoshi and SnuggleBunny in the first half of 2013. This left Bloo Bander and Redstar as the sole staff members.

In August 2013, the group moved to the Sidewalk Bar, located in Birmingham's city center, and began styling themselves as Brumfurs. Redstar stood down in October 2013 and was replaced by Torikabuto and Guystar. Bloo Bander stood down in March 2014, and Ziegenbock joined the team in July 2014.

They meet on the third Saturday of each month in the Bullring Shopping Centre. The meets include a fursuit walk to the city center or to a local park.