Brown Wantholf, (born September 12th 1987), was originally known by the name the_brown_wolf and has been active in the fandom since around 2004. He is an Australian furry adult fiction writer who currently lives in New South Wales Australia. Also known to go by Wuffie, he is currently in a LDR with Malin who he has known since mid-late 2008. 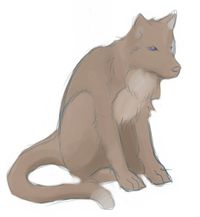 Brown Wantholf's fursona is a Wantholf, the wolf-cougar hybrid species of his own creation. While the name is a combination of Wolf and Panther, a subset of the Cougar family.

He has a silver marking around his left eye that streaks down his left cheek, under his muzzle and flows into his silver chest fur. This is based on the silver streak he has in his hair above his left temple and facial scars he received to the left side of his face from a dog attack at the age of 2 years old.

He also has four other "forms", all with the same personalities but different shapes. They are a Cobra[1], Dragon[2] and sometimes a shinny Houndoom Pokemon[3]. The fourth "form" is a gender swap of his normal "fursona"; unlike the other three there is a slight difference in personality with the female form being more submissive then his male one.

For a long time he also used his Dragon "form" as a manifestation of his ADHD and the anger issues he was going through at the time of his Fursona's creation. This has however dropped in the last few years as he has apparently had no need for it.

Some of his works include:

A rather long tail of a Raichu and Blaziken set in an office environment where love sparks between the two. Was one of his longer works with a sequel currently in the works [Still on hold as of 2007].

Was the second Slash fiction written by him staring Renamon and Guilmon. This lead into two subsequent chapters being written, there is a hint at a 4th chapter being written but nothing confirmed yet.

This was his first attempt at a Christmas themed story. Another Slash fiction, this time with a love story between Rudolf and Donner. Most of the names of the reindeer mentioned in this tail are the "original" names of the deer. [This is by far one of his oldest].

All of his completed post 2008-2009 works were proofread and edited with the help of Si "Evertide" M.

Wantholfs were originally created by Brown Wantholf as the species for his fursona. The name is an Amalgam of species name Wolf and the general feline species Panther, though physically it more closely resembles a Cougar. So far there are no other known Wantholf characters.

Wantholfs have the large chested body and elongated muzzle facial structure of a wolf, the curved tipped, fluff filled ears and long slender prehensile tail of a cougar.

They range from black through to red, brown, off white, grey and white.

High range for Wantholfs is 1 and a half foot to 2 and a half foot, measured from where the front paws touch the ground to the top of the shoulder blade, and from 5 foot to 6 foot from tail base to muzzle tip.

With a majority of its species being that of a wolf they have the same pack mentality as that of wolves in combination with the hunting instincts and some skills of a cougar.

Alpha males always lead the hunting group, mostly males though strong females do join the hunter pack as well, making the first move on the kill alone. Only when in need of assistance does the rest of the pack charges in.

Mating is not restricted to just the Alpha male and female and is allowed through the whole pack, although the Alpha female is in charge if assigning caring duties to other females, both with and without young, thus sharing the duties to all females and keeping the pups safe within the pack.

Litters can range from 4 pups up to 7 with gestation being around 5 to 6 months. At birth the pups cannot see, taking about a week for their eyes to open and require constant supervision from females for feeding and safety.

The Alpha male always gets first choice of any female coming into season; however he will pass this up to the lowest male in the pecking order so that even the weakest of the pack has a chance to pass on its genes, thus providing a constant underclass used for pack structuring.