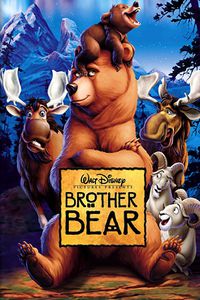 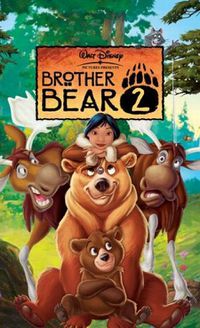 Brother Bear is an animated film produced by Walt Disney Feature Animation Florida and released on November 1, 2003, by Walt Disney Pictures and Buena Vista Distribution. In it, an Inuit boy named Kenai pursues a bear in revenge for a battle with it he provoked in which his oldest brother, Sitka is killed. He tracks the bear down and kills it, but the Spirits, angered by this needless death, change him into a bear himself as punishment. In 2006, it was followed by a direct-to-video sequel, Brother Bear 2. This time, Phil Collins had no involvement with it and now has songs by Melissa Etheridge. Also in the sequel, Kenai, Koda, Rutt, Tuke and Tug are only five of the original characters to return. While four of the actors, Jeremy Suarez, Rick Moranis, Dave Thomas and Michael Clarke Duncan return to reprise their roles as Koda, Rutt, Tuke and Tug, Patrick Dempsey replaces Joaquin Phoenix as Kenai.

Long ago in a post-ice age land when mammoths still live, there are three brothers named Kenai, Denahi, and Sitka. Denahi, the middle brother, and Sitka, the oldest, work hard. They think Kenai should work more and play less. Kenai, the youngest, hates bears because they fight for the same food, overtake the land, ransack his village and ruin his coming-of-age ceremony. Each brother is given his own totem: Sitka, the eagle of guidance; Denahi, the wolf of wisdom; and Kenai, the bear of love. Kenai scorns the totem he has been given, believing that love is not brave or noble and his hatred on bears.

When Sitka is killed in a battle with a bear that Kenai provoked, Tanana, the tribal shaman, officiates a funeral rite for Sitka. Suddenly Kenai ignores the village teachings of brotherhood with animals and sets out to hunt the bear for revenge and eventually kills it, and Kenai cut the line from his spirit totem, so that he may never wear it again. To punish Kenai for this hateful action, the Great Spirits, represented by the spirit of Sitka, transform him into a bear to teach Kenai about love and brotherhood. Unfortunately his other brother, who was pursuing Kenai to stop him, doesn't realize what has happened. He finds Kenai's torn clothes and believes the bear took his brother's life. In grief, he vows revenge.

Disoriented and barely escaping Denahi's wrath by falling into the river, Kenai awakens on the shore and in the presence of Tanana, who eases him through his initial shock at his change. Although she cannot understand his bear speech, she advises Kenai to find where the lights touch the mountain so that he can ask Sitka's spirit to change him back, and then she disappears without giving him directions. To Kenai's surprise, he finds he can talk with the other animals - but the only animals who are willing to talk to him are two stupid sibling moose, Rutt and Tuke, who are more interested in cracking jokes at Kenai's claims to be a man than helping him. Along the way, Kenai meets a talkative, pesky bear cub named Koda, who claims to know the way to the salmon run where the bears gather to fish and where the lights seem to hug the mountain.

What follows is a journey in which Kenai, when not dodging Denahi who is now hunting him, grows rather fond of the irrepressible Koda who he learns shares his spiritual beliefs. This in turn puts his hatred of bears in a stark perspective that forces him to reconsider, especially when he learns that Koda sees humans as the same sort of dangerous monsters as he himself once believed bears to be. This culminates when they finally reach the salmon run and Kenai has the awkward experience of being surrounded by bears. Yet, the bears quickly accept him and he in turn learns about the loving community of these animals that makes his hate seem so foolish even as he learns to enjoy himself.

This contentment is shattered when Koda tells the story of his separation from his mother. Kenai is aghast to realize the story is about the fight he and his brothers had with the killer bear. It immediately dawns on Kenai that he is the one that killed Koda's mother. In shame at profoundly harming a cub he has grown to love, Kenai flees the gathering, but Koda follows and asks what's wrong. With great remorse, Kenai confesses that he is responsible for the death of Koda's mother. Koda is distraught and runs away in grief, loss, and betrayal while ignoring Kenai's apologies and pleas for forgiveness.

With nothing left to keep him with the bears, Kenai scales the mountain to contact the spirit of Sitka. Koda mourns alone, but then has a chance encounter with the squabbling Tuke and Rutt who reconcile because of their brotherhood, which makes Koda realize the importance of his relationship with Kenai. Meanwhile, Denahi finally tracks down Kenai; in the ensuing fight, Koda, having forgiven Kenai, rushes in to help at a critical moment in the fight. Kenai struggles to protect Koda and is willing to sacrifice himself to save the cub, much as Koda's mother had done; with this selfless act, Kenai shows the spirits that he has profoundly changed for the better and they allow Sitka to change Kenai back into a human.

Yet, while Kenai revels at his regained humanity, he realizes that he can no longer talk with Koda, a cub who is now orphaned yet again by the bear he had begun to accept as a brother. Rather than abandon Koda, Kenai asks Denahi that Koda needs him, and Denahi called Kenai "little brother" instead of "baby brother", and Sitka transform Kenai back into a bear, and he and his brothers hug together, and say goodbye, and Koda and his mother hug together, and say goodbye.

The film ends with Kenai as a bear, accompanied by Koda, being welcomed back by his tribe and pressing his pawprint to the cave wall which bears the handprints of countless generations of other tribe members who also fulfilled the calling of their totem animals.

In a post-credits scene, Koda says to the audience that no fish were harmed in the making of the film, followed by a bear chasing a salmon crying for help and signals for shooting to stop. He covers the camera with his paws and the scene goes black as he accidentally breaks it while the bear burps.

The reaction from film reviewers was severely mixed with many panning the film as a retread of older Disney films like The Lion King and the 20th Century Fox film, Ice Age (although Brother Bear began production before Ice Age did), while others defended the film as a legitimate variation of the theme.

Of note to many critics and viewers was the use of the film's aspect ratio as a storytelling device. The film begins at a standard widescreen aspect ratio of 1.75:1 (similar to the 1.85:1 ratio common in U.S. cinema or the 1.78:1 ratio of HDTV), while Kenai is a human; in addition, the film's art direction and color scheme are grounded in realism. After Kenai transforms into a bear twenty-four minutes into the picture, the film itself transforms as well: to a CinemaScope aspect ratio of 2.35:1 and towards brighter, more fanciful colors and slightly more caricatured art direction.

The movie stars the voices of: