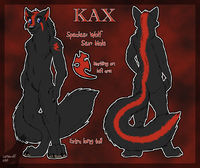 Kax Bloodwolf (a.k.a Rabid Reptile) is a fursuiter. Originally from Queens, New York, U.S.A., he lives in Lewes, Delaware, U.S.A.

Kax is a member of The Furst State. He is a regular attendee of the Delaware Furbowl meet and has been to several Furbowl meets.