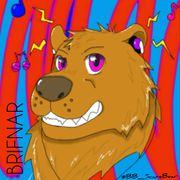 Brifnar The Bear, Brifnar or just Brif, also known as BB_ScareBear or Scare Bear and Curtis Huff (born May 29),[1] is a furry writer from Port Huron, Michigan, USA.

Before the age of 12, Brifnar was diagnosed with both bipolar disorder and Asperger's syndrome, and was raised by his divorced parents.

Brifnar is a high school graduate of the Virtual Learning Academy (VLA),[citation needed] and took psychology as well as performing arts as his high school electives.

Between 2013 and 2016, Brifnar has done works of charity for the Make-A-Fish Foundation where he participated in the annual walk around the Detroit Zoo to raise money for Cancer. he also volunteers at his local Methodist church's "free store" for struggling families.

As of 2021, Brifnar continues to actively make daily content he posts to his Twitter feed, as well as working part-time at Lynch's Irish Tavern in Port Huron, Michigan.

Brifnar's writing has been published on BentoByte, an anime, manga, and gaming website, and on Wattpad.

A fan of video games and eSports, Brifnar was a forum moderator, pub stomper,[clarify] as well as the chief of news[clarify] for Black Knights Gaming.[clarify][citation needed] Since 2017 Brifnar has left the eSports world.