Brewed On Grant is a comic by Rob Rogers, the editorial cartoonist for the Pittsburgh Post-Gazette.[1]

The comic pokes fun at the politics and local culture of the city of Pittsburgh, Pennsylvania, USA.[2] It takes place in a fictitious diner on Grant Street (the home of Pittsburgh city government), and the cast includes Rosie the Waitress, Vic the Steelers Fan and a host of assorted local politicians and newsmakers.

Brewed On Grant and furry[edit] 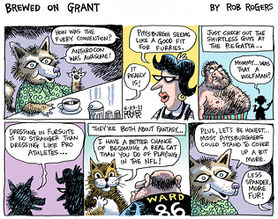 The Brewed On Grant strip of June 29, 2011, mentions the furry fandom and the Pittsburgh held Anthrocon furry convention (the strip being published just after Anthrocon 2011).[3]

In the comic, a wolf fursuiter tells the diner's waitress, Rosie, about the "awesome" time he had at Anthrocon. Rosie comments "Pittsburgh seems like a good fit for furries.", and the wolf declares

At the end of the strip, both characters conclude: