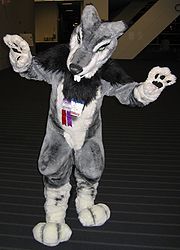 During the late 70's, JBadger attended his first SF convention, and started reading Heavy Metal magazine. In the 80's, JBadger first walked into the Science Fiction Forum at Stony Brook, and his first RPG game came soon after.

JBadger first met a furry artist circa 1986 at an AFA (anime club) meeting in New York. He first shown an issue an Rowrbrazzle by someone showing their artwork.

JBadger started to go to SF cons for the parties, and to hang out with people he knew. with people I knew at the time. The first furry party he attended was at Philcon in 1986.

By 1989, when Worldcon was in Boston, JBadger found himself on staff for special events. In the early 1990's he would try to attend any convention where the former Mailbox Books run at that time by Ed_Zolna had a dealer's table, and started to accumulate quite a collection of zines.

In 1994, JBadger attended Furtasticon in Philadelphia, and in 1995 went to ConFurence East in New Jersey. During this he was still social with the anime folks, and was given a button to go to Anthrocon in Albany in 1997. Since then he has attended every Anthrocon, and at Anthrocon 2004 was on staff helping with the Charity auction/Masquerade. Also in 1998, JBadger was a member at large on the board of directors for ICON Science Fiction, Inc.

As of December, 2007, JBadger went to several furry and science-fiction conventions each year. He was on staff as Puppet Second Midwest FurFest and was one of many Charity/Masquerade staff members of Anthrocon, owning more than forty puppets and often found behind a puppet stage.

JBadger owned six fursuits. His first, obtained in circa 2002 was Raccoon, who was seen at Megaplex, Midwest FurFest and I-Con that year. In 2006, JBadger got his second fursuit, Brendon, a wolf made by Arend Studios. JBadger's third fursuit, Sherbert, was a colourful zonkey who was constructed by Myfurcreations.[2] In addition he owned Chef Sam, a wolf fursuit often appearing in a red apron and chef's hat. His commissioned ratel suit Nom Nom Crunch built by Joecifur, and finally the Halloween bat Spoopy built by Midori (fursuiter). Spoopy's zipper placement were redone by Midori to accommodate JBadger's limited movement in his right arm.[3]

JBadger was a member of HI-4! Entertainment, a local mascotting group who perform for charities and community events.[4]

In real life, JBadger was a volunteer firefighter and was an avid geocacher [5][6].

In early 2016, JBadger in his livejournal stated[citation needed] that he was diagnosed with cancer, specifically pleomorphic liposarcoma, after finding a lump under his arm near his chest. JBadger contined a serotonin inhibitor (a trial treatment that was named after his brother called "The Harvey Miracle"), radiation treatments, and chemotherapy through April 2016, which included his entering hospice care. He passed away on May 28, 2016.

A service is being planned the Fall of 2016 with the Smithtown Fire Department of Smithtown, NY.

On May 31st his family submitted an obituary to a funeral home for publication. A number of individuals contributed, including family, Smithtown FD, coworkers, and friends.

"Lincoln W. Kliman died peacefully in the home of his brother Arthur and sister-in-law Debbie in Epping NH on Saturday May 28th, 2016 while listening to the “Sound of Music”. He was 55. He was the third son of Merwin and Bernice (deceased) Kliman of Glen Head, NY and leaves three brothers and another sister-in-law; Harvey and wife Sandy, Arthur, & Dave as well as four nieces and a nephew.

Although he spent most of his life living and working on Long Island, NY he was an avid traveler, having made many trips all across the US, Europe, Asia and the Middle East. His many interests and activities included being a volunteer firefighter and EMT, being involved in a number of clubs and conventions revolving around science fiction, anime, furry and geocaching. He graduated from Stony brook University with a BSEE and attended courses for an MSEE at Northeastern University.

Lincoln started his engineering career in the 70’s working for Telesignal. That company was purchased by Fire Burglary Instrument (FBII). The division he worked for was then purchased by ADEMCO, then Pittway, and finally Honeywell in the 1990’s.

Lincoln had a huge impact at Honeywell Melville and on the Security Industry: Lincoln was Honeywell’s “go to guy” to solve their most difficult engineering problems. He was their main Zwave device developer and was responsible for all Zwave development. Lincoln developed numerous Security Systems and supporting peripherals. He was versed in many programming languages- C, C++, Java and Python etc…. Lincoln worked and developed Applications extensively with many operation systems like- Windows, Linux, ThreadX, NetX etc….

Today if you walk into a home or business and see a security system on the wall, you can be almost certain Lincoln had something to do with it, if not running code Lincoln developed!

Lincoln was an active 28 year member of the Smithtown Fire Department FireMedic Company 6. After joining the department in April 1988, Lincoln completed his training as an Emergency Medical Technician and then subsequently furthered his certifications to become an Advanced Emergency Medical Technician. He believed that his training did not stop when he received his qualifications. Lincoln continued to attend Medical Education seminars up until a few months before his passing. Despite his illness, Lincoln continued to serve his community and the department for as long as he was able.

While serving his community, Lincoln was involved in many situations where his interaction saved lives. In 1990, Lincoln was also recognized by his peers when he was awarded the coveted Firefighter of the Year Award. In 1997, he was twice awarded EMS citations for his actions involving saving the lives of an elderly woman as well as an infant. He was always known for quietly getting the job done without much fanfare.

On a personal level, Lincoln was a gentle soul who always unselfishly tried to help the other members of the department. He was known to sign up for EMS shifts on the holidays so the other members could remain with their families. Despite his desire to keep the intentions of his efforts quiet, many of the department members noticed this generosity and appreciated what he had done for them on every Christmas holiday!

The department and community already feel Lincoln’s loss. He will be remembered as an Emergency Medical Technician who wanted to provide high quality EMS service to his patient’s and community, which was evident in all of his actions.

Since the late 1970s Lincoln traveled to attend and volunteer at fan conventions throughout the U.S. and beyond, joined role-playing games, collected science fiction magazines and puppets, and socialized with enthusiasts with similar interests.

Lincoln’s interests led him to create his found identity, JBadger, based on the personality and many stories of honey badgers and the science-fiction film series Men In Black. His life is an inspiration to his family and friends, whether he knew it consciously or not; he lived by the motto of living life to the fullest and focusing on the positive.

Lincoln brightened the lives of audiences by performing as different fictional characters he conceived for conventions and volunteer events. Some of these colorful personalities included Chef Sam the wolf, Nom Crunch the honey badger, and a part-Donkey, part-Zebra named Sherbert. Lincoln used these characters at volunteer performances for the group "Hi-4" to bring smiles to the faces of children and families at community events, charity fundraisers and hospitals.

Although there will be no immediate service or funeral, the family does plan on having a memorial service for Lincoln that will be hosted and held at the Smithtown Fire Department in the fall. For those interested in attending you may email his brother Arthur at akliman@gmail.com.

For those interested in giving a gift in Lincoln’s name, consider either the Abby Rockefeller Mauzé Patient Recreation Pavilion at Memorial Sloan Kettering Cancer Center or Rockingham VNA & Hospice at Exeter Hospital."