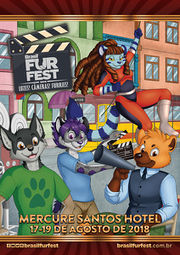 Brasil FurFest 2018 - Lights! Cameras! Furries! was the third edition of Brasil FurFest and took place between August 17th and 19th, 2018, once more at the Mercure Santos Hotel, in Santos, Brazil. The event had as theme the world of cinema. For the first time the first four super sponsors registered on the website had their fursonas represented in the official poster, they were: Yrokinn, Eddy, Saigo and Zakumi.

The very famous Scottish musician and composer Fox Amoore and Brazilian fursuiter and youtuber Crash Azarel were the guests of honor, representing audio and video, the two components of movies.

On the afternoon of Friday, August 19th, the hotel's convention center was open to the public for accreditation, opening ceremony and rave. Popcorn was distributed free of charge to set a mood in the venue and a bar with food and beverage options was placed at the heart of the lounge. The opening ceremony featured a silent film about the friendship between furries and human society and a comedic superhero short film featuring characters Fox Pile Man and El Malo (from the event Furboliche 5 - Heroes and Villains) was presented.

During Saturday, activities that have already become a tradition in the event took place, among them: social mixer, panels, workshops, dealer's den and the fursuit parade. For the first time the event hosted a round table with the parents of the minors attending the event. In the evening the schedule had a karaoke room and the dance competition hosted by Ursula Mercure, the drag-queen character of the chairman of the event, since the charity challenge set at the opening ceremony completed its goal. The right to name the character was auctioned and raised more funds for charity. Dance Competition was won by Koga on fursuiters category and Jamie on non-fursuiters category. Saturday night ended with the show of the guest of honor Fox Amoore, who presented some of his compositions along with famous songs from Beatles to videogames. Fox had some relatives living in Brazil as guests during the presentation.

The Sunday schedule included the already traditional fursuit games, panels, a movie session to celebrate 10 years of XDragoon webseries produced by Felipe Marcantonio. New activities were introduced: Q&A game about the furry fandom, meet and greet for the members of the application Furry Amino and photoshoot with guest of honor Crash Azarel. A round table on suicide prevention was held prior to the start of the charity auction. The closing ceremony for the first time was not the last activity of the event. After it, staff members hosted a panel with backstage stories of the Brasil FurFest. Karaoke room and the Dead Dog rave ended the official programming on Sunday.

The 2018 edition of Brasil FurFest had the largest audience recorded by the event gathering 431 furries from 8 countries (Brazil, Argentina, Uruguay, Paraguay, Chile, Colombia, United States and Scotland), a 50% increase over the previous year. The parade fursuit also reached its highest number with 115 fursuiters.

During the ceremony, staff announced two charity challenges to help raise donations to NGO SOS Vida Pet Litoral. The first challenge was to raise R$ 500 (around US$ 125) during the ceremony so that co-chairman Ruby would get a pie in her face. The challenge was completed and an auction was done to pick an attendee to throw the pie and it raised additional R$ 200 (around US$ 50). The chairman of the event also announced that if the attendees manage to raise R$ 2,000 (approx. US$ 511) until Saturday 7:00 pm, he would host the dance competition dressed as drag-queen. The money was raised and Ursula Mercure was presented and named at Dance Competition. Another challenges were presented at the charity auction. The auction surpassed all expectations and raised more than R$ 9,000 (approx. US$ 2,300) in donations. The charity campaign set the record for the event and grossed R$ 12,359.45 (US$ 3,160.90), earning nearly five times more than in 2017.

During the closing ceremony, the staff of Furcamp, a new camping con that will happen for the first time in March 2019, introduced the event to the public. Just after Furcamp's presentation, BFF revealed its new slogan: "Friends Forever" and 2019's theme: "Furtrópolis, Brazil". Next Brasil FurFest will happen again at Mercure Santos Hotel from August 23th to 25th, 2019.