Brasil FurFest, or BFF, is the first hotel-based furry convention to happen in Brazil. It was first held over September 9-11, 2016 at Mercure Santos Hotel, in the city of Santos, Brazil.[1].

Next iteration is scheduled to be held from July 14-16, 2023 at Sheraton Santos Hotel. Brasil FurFest is a member of the FLEF, group of Brazilian furry events. The convention's slogan is "Amigos para Sempre" (English: "Friends Forever").

Furboliche (São Paulo's Furry bowling event) founders had the idea of organizing a furry convention in Santos back in 2014. Proposed name was "Confursão" (abbreviation for Convenção Furry de São Paulo, Portuguese for São Paulo's Furry Convention). Due to lack of experience, they decided to postpone the convention and started Furboliche instead, to acquire know-how and to understand the dynamics of local furry fandom.

After Brazil's camping-based furry convention Abando announced 2016 would be its last year,[2] the staff of Furboliche decided to review their plans. They announced they would start a hotel-based furry convention, to prevent Brazil from lacking any multi-day events. Proposed name "Confursão" was withdrawn and it was replaced by "Brasil FurFest" to avoid similarities with a famous furry room in anime cons called "Confuria".

Official announcement of Brasil FurFest was done on February 13th, 2016, at Furboliche 5 event. Before traditional fursuit raffle, the staff showed BFF's logo and announced the convention would start as a crowdfunding with a goal of R$ 6,000 (around US$ 1,500) for the basic costs of renting conference rooms and producing conbook, badges and other stuff. Further goals for crowdfunding campaign were later presented for adding more conference rooms or renting party bus in case of bigger donations. Videos and pictures of the location were presented in the several screens of the Bowling Place and all Furboliche staff members were using buttons with Brasil FurFest logo. Before the announcement, a Facebook page was made and teaser videos in Portuguese, Spanish and English were published.[3]

First crowdfunding goal of Brasil FurFest was reached in barely 13 days. In an official announcement on the social networks, the staff of the convention confirmed the event for the proposed dates. At the end of crowdfunding campaign, all additional goals (that introduced more structure, rooms and activities to the con) were reached and R$ 15,390 (approx. US$ 3,850) were pledged. After the end of the crowdfunding, regular sales of tickets stated at the convention's website.

In April 24th, 2016, BFF's staff announced the theme for the event: "Peludos em Santos" (Furries in Santos) - a joke with the name of a very famous Brazilian Rock song called "Pelados in Santos" (Naked in Santos). Guests of honor were announced in the same day.

Brasil FurFest 2016 happened as planned in Mercure Santos Hotel and gathered 169 furries (among them 54 fursuiters) from 5 countries (Brazil, Argentina, Colombia, Paraguay and USA) setting a new milestone for the furry fandom in Brazil: to have a hotel-based furry convention in Brazil with panels, workshops, dealer's den, artist's alley, fursuit parade , fursuit games and parties. Brasil FurFest was also the first furry event in Brazil to have a charity campaign, helping street animals from the city of Santos.

Second year of the convention had several improvements compared to the first year from logistics to organization. BFF 2017 started on friday night with the opening ceremony and the night rave, and for the first time Charity Auction was made to boost donations to the charity campaign. Brasil FurFest 2017 recevied 287 furries from 9 countries, surpassing Furboliche as the biggest furry event in Latin America at the time.

The growth of the event was important to boom the anthropomorphic culture in Brazil and in South America. In the first three years, the number of attendees increased near to 3 times, bringing together furries from almost all states of Brazil and from 11 countries in total (Brazil, Argentina, Uruguay, Paraguay, Chile, Colombia, Mexico, United States, Germany and Scotland)

In the 2018 edition of Brasil FurFest had the largest audience recorded by the event gathering 431 furries from 8 countries, a 50% increase over the previous year. The charity campaign set the record for the event and grossed R$ 12,359.45 (US$ 3,160.90), earning nearly five times more than in 2017. The fursuit parade also reached its highest number with 115 fursuiters. BFF 2018 was also first edition to have an cellphone (Android) app with schedule, maps and other relevant information about the event and the first year to have the flag of Megaplex at the Main Events Room, representing the sister con partnership both conventions started in 2018.

During closing ceremony of Brasil FurFest 2018, the staff of Furcamp, a new Brazilian camping con that happened for the first time in March 2019, introduced the event to the public. Just after Furcamp's presentation, Brasil FurFest team revealed its new slogan: "Friends Forever".

Brasil FurFest celebrated it's 4th iterarion featuring a urban theme called Furtropolis, a furry city in Brazil. The event gathered 571 Furries from 8 countries. BFF 2019 featured first Foxes and Peppers show ever to happen in Latin America. Fursuit Parade was not held for the first time due to bad weather. During the closing ceremony it was announced that Brasil FurFest 2020 would have "A Haunted Hotel" as theme and Uncle Kage as guest of honor.

Due to the Novel Coronavirus pandemic, Brasil FurFest staff announced in May 2020 that they were going to postpone the convention to 2021 and host BFF Night in August 1st, a livestream with several activities on Youtube. In June 2020 it was announced theme "A Haunted Hotel" would be changed due to the death of three Brazilian furries in just two weeks. In april 2021, a new postponement was announced and next BFF under the theme "The Fantastic Candy Factory" is scheduled to happen again at Mercure Santos Hotel from May 13th to 15th, 2022. In addition, it was announced that an online event, called BFF Online, would be held on July 16th to 18th, the dates on which 2021 event would be held. After the news of Mercure Hotel closure in July 2021, BFF 2022 was moved to Sheraton Santos Hotel and new dates were announced: From July 15th to 17th, 2022. Brasil FurFest 2022 had 872 attendees and at the Closing Ceremony it was announced that Brasil FurFest 2023 will be held again at Sheraton Santos Hotel with theme Furry University.

Online Events during the Coronavirus Pandemic[edit]

Brasil FurFest was not hosted at the hotel during the Coronavirus Pandemic. Online events were organized instead.

Report made by TV Tribuna/Globo at BFF

Since 2022 BFF have been hosted at Sheraton Santos Hotel in Santos, near Sao Paulo, Brazil. The venue is located in a corporate complex with mall, supermarket and other facilities. Previously the convention happened at now closed permanently Mercure Santos Hotel inside Clube XV-Office complex, in front of the Boqueirão Beach. All hotel rooms had sea views.

Attendees during one of the activities 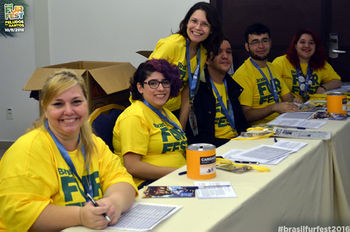