BrandyTheWuff (shortened to just Brandy; born March 24, 1999) is a British furry photographer from Bristol, United Kingdom. He is mainly active within the Southwest region.

Brandy is a regular attendee of the BristolFurs, and is a photographer for Furcation. 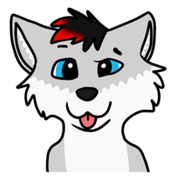 Brandy's fursona is based on an anthropomorphic timber wolf, and contains light grey, dark grey and red colours.

Brandy first discovered the furry fandom when searching for wolf references online in an art class of late 2010. It wasn’t until 2012 that his curiosity led to researching the fandom further, eventually finding sites like Lava Dome Five and Fur Affinity. The latter became more of a frequent visit, and in mid 2012, a (now disabled) account for viewing artwork was created.

In 2013, Brandy started to practice drawing anthropomorphic animals, and felt that a new Fur Affinity alias was needed. Still pre-dating the creation of his own fursona, he created a new account under the name slightlysingedmoss, which is still in use today. The creation of Brandy eventually happened in May 2014.

Brandy’s activity remained exclusive to Fur Affinity throughout 2014, and he initially struggled to find a suitable method to engage with the fandom. Having first started with drawings, he found it was getting progressively harder to focus. After suffering a severely shortened attention span from depression and the stress of his final years in secondary school, he called it quits on drawing, and turned to music production. After his first digital EP & several unreleased singles were self-produced, he moved away from music production, and in 2015 started to incorporate his photography into the fandom. This proved successful, and is still his primary method of engagement.

Brandy discovered furmeets with the help of a local Fur Affinity user in January 2015. His first furmeet was in Bristol that March, just before he turned sixteen.

Brandy started regularly attending furmeets in Cardiff, Wales as of November 2017. He plans on reaching out to other furmeets once he has adequate funding for transportation.

One of Brandy's favourite captures, of his home-city. (Taken April 2014)

Besides photography, which has been an interest since around 2006, Brandy is a keen computer enthusiast & programmer, and enjoys being a web & software developer.

He is also a huge music enthusiast, commonly referring to himself as ‘a bit of an audiophile’. It’s not uncommon for him to be seen wearing headphones for the entire day of most days, when alone. Some of his favourite music revolves around the Bristol underground scene in his home-city, with Trip Hop artists such as Massive Attack; although Brandy listens to a large range of music, including pop, jazz, classical, rock, electronic & reggae.

He also enjoys playing laid-back video games with friends, where he can simply unwind and not have to worry about competition.