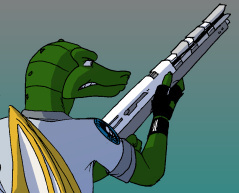 Bowr in a DSV Nautica fanart by Vanessa Pridgen.

U. Michele Bowr, or Bowr for short, adds a touch of science fiction to the otherwise medieval setting of the webcomic The Intolerators. He is an intelligent reptile who arrived from another planet. His purpose here is a mystery. An injury to the head erased all of his memories of how he got here.

Currently, Bowr passes himself off as a foreigner who just moved into town, as he feels there's no hope of ever returning to where he came from, he speaks very little about his life before moving to Bovineton. He tries to lead a 'normal' life in his new home, first by assisting the local Intolerators Tserisa and Libby against a rash of lactose problems, and finding employment with the anti-lactose agency Lactaide by joining up as the third and newest member to Tserisa's team. 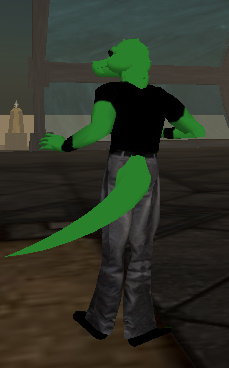 Bowr on Second Life.
Honah Lee, a young peledragon with minor telepathic skills, is responsible for Bowr's quick mastery of the local language.

Bowr has photophobia, which often requires him to wear dark glasses. He also has a fetish for firearms, referring to his Winchester shotgun as 'Kally.' You can sometimes find him wandering around Second Life as Bowr Udal.

Bowr grew up on the planet Adorona and worked on various classes of space vessels as a navigator, possessing a special sixth sense that could be used to guide ships on their voyages through space. He raised one daughter as a single parent after his wife passed away.