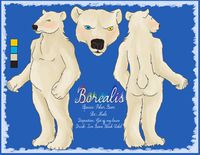 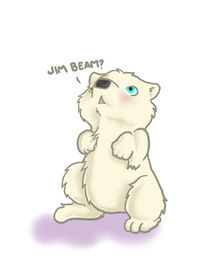 Borealis Aurora is a fursuiter who lives in Winnipeg, Manitoba, Canada.[1]

Borealis' fursona is a pure white polar bear with one yellow and one blue eye. He has a pink tinge to his muzzle due to his penchant for Jim Beam. He hates to be hungover, so he stays half cut all the time.

Borealis' fursuit, depicting his fursona, was built by Lazy Leopard.[2]

Borealis is a pack leader of the Wild Prairie Furs group.

In 2014, he was interviewed for an article about the furry fandom in the Winnipeg Free Press.[3]