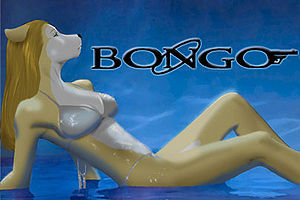 Bongo as a Bond Babe

Bongo Queen was introduced to the furry fandom in 2005 by her then-mate, Dago (an artist also known as AnominousWolf). She had been drawing anthro characters long before she knew about the fandom itself. After learning that there was a group of people dedicated to portraying animals with human characteristics, she created her own fursona, Bongo, a golden Husky. Joining deviantART and Fur Affinity boosted her desire to draw more for furries; she would leave the former in 2007 (and also stopped uploading to the VCL) to focus on FA.[3]

Bongo has attended Further Confusion regularly since 2006 with Dago, who she married on July 11, 2010.[4] During this time she became a costumer, building fursuits of Bongo, Valentine (a pink fox) and Penelope (a Cocker Spaniel). She was working to create Sookie (a bear) in time for Further Confusion 2011; and in 2013 her company, Mischief Makers won first place in the Professional Suit Maker category of their Masquerade; it would go on to be invited to several conventions as guest of honor.[citation needed]

Bongo announced in Spring 2013 that she was moving into a house, and would be having a baby with Dago that Fall,[5] who was named Lilly Louise.[1] However, by May 2018 they had split up due to "irreconcilable differences" (according to Dago)[6] or false "domestic violence" leading to an arrest and a restraining order (per Bongo).[7] She pretended to fight to keep Mischief Makers[8] while Dago struck out with Space Goat Costumes.[9] Bongo moved out that July[10] was officially divorced on December 10[11] and moved into a new home with Lilly the month after using donations.[12]