BonBun Paperdoll is a large, hermaphrodite minotaur, who can be found in the game Second Life.

BonBun (or Bon as she's sometimes called) is a minotaur with a shaded past. despite what some may think upon seeing her, she claims to at one point in her life of being a rather common vixen. If asked further she reveals that she is actually a Chaos Minotaur (as in the game Warhammer), the result of other-worldly energies warping her into the huge beast she is today. despite this, she's a rather easy cow to get along with. She's often seen hanging out with her friends in areas from North Star to Furnation, but usually she can be found either in her own private cave or at the Hyper Dome which is owned by her good friend Kamber.

BonBun is also the owner and designer of Chaotic Creations, a small avatar business in Second Life. Using her own twisted sense of talent and the help of several good friends to produce all sorts of looks and toys to sell.

Before going into business for herself, she worked with a number of others (many of whom she's still good friends with) building for a Warhammer 40,000 area, though she left with several others cause of mis-management by the owner. 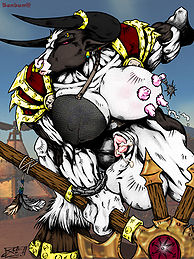 Weight: More than you can lift

Wears armor rather than clothes when she needs to.

Is often seen posing with either a very large axe or maul.

Usually moos as a greeting.

Is a pinup model for PlayPony magazine.

Hates finding out that whatever she just bought is no copy and no mod.

Does what she can to promote more cows in Second Life.

While she considers herself a 'fur' she firmly believes that you shouldn't try to add fur and tails to everything.