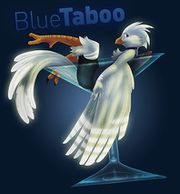 Blue Taboo, which operated under the name Yiffit until September 2008, was a furry art site which continued in development until 2010.[1]

The site most recently housed forums dedicated to its development, as well as a splash page mentioning the site as "coming soon".

Blue Taboo operated under the name Yiffit until September 2008, and was an adult furry art website with moderated content[2]. Its sister site, Furverts, held mature art from all artists. It was based on the same codebase as ArtSpots, though they were run by different people.

Yiffit went offline after a server move caused a number of issues. The site was never brought back up due to problems with the code and personal obligations within the team, eventually resulting in the domain expiring and the site shutting down for good.[3] At its height it hosted along with Furverts approximately 20,000 submissions.

After the server move effectively killed the original incarnation of the site it was decided to start fresh and to create a new site dubbed Blue Taboo which would accept submissions without moderation. Development was in the early stages after a number of discussions on how best to tackle the project. The site was to run on a custom-built gallery engine called Bandage, which was to be released under the AGPL. Volunteer applications and a call for help from the community was published in August 2009.[4]

(Since circa 2017 Floof.us has been a personal website for Aura Cantus Fluere.)