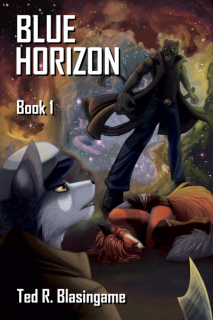 Blue Horizon was a series of stories created in 1996 by Ted R. Blasingame with the assistance of Eileen Blasingame and Steve Carter. Due to personal and work-related issues, the series was placed on permanent hiatus in 2009 and is no longer under production.

The storyline revolved around the adventures of the crew of the Blue Horizon, a space freighter captained by Merlin Sinclair, an anthropomorphic grey wolf making deliveries across the Planetary Alignment (a trade alliance between sixteen worlds in nine star systems). The series which began in the spring of 1996 included many interpersonal tales between a close-knit crew as they encountered problems that arose with the company, relationships with the families and friends of the crew, brushes with the effects of war and other catastrophes, business rivalries, and repeat encounters with a stalking pirate ship intent on crushing the crew and taking their cargo.

At the end of the series, there were forty-three 'episodes' divided into four 'seasons' with a follow-up prequel, Blue Horizon 1261. Another of Ted's major stories, Hoenix, takes place in the same universe but showcases a different cast of characters.

Books containing the collected season episodes can be purchased in softcover trade paperback from Lulu Press. The stories are also still available in the Library on Ted's website.