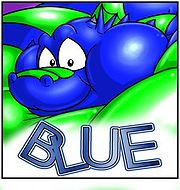 Blue (also known as Minnagowa Seiryuu; born February 26, 1984)[1] is a furry artist who lives in England, UK.[1] His fursona is a blue and green coloured dragon. Blue's interests include inflation and fatfurs, which feature prominently in a majority of Blue's artwork.