Bluberry The Dog or simply Bluberry (best known by his real name, Brady S; November 11th) is a YouTuber and future fursuiter. They are from Massachusetts. 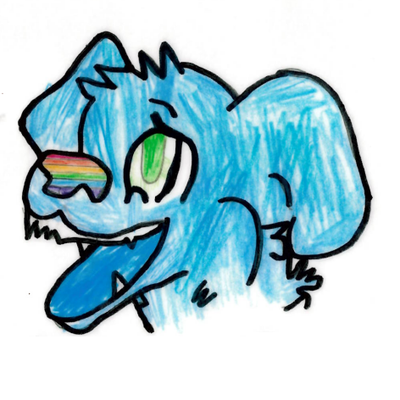 This is Bluberry The Dog!

Bluberry's fursona is a Blue and White Golden Retriever. His favorite fruits are blueberries because of his fursona's name and least favorite foods are cantaloupes.

Bluberry was first designed in 2019 as his fursona by a friend of his named Cyber The Sinart Wolf (commonly known as CyberSuites due to her interest in developing fursuits including her own). She is also apart of the furry community and shows her interest by hand-making her fursuit as well as drawing her character. As Bluberry started to be designed for the first time, minor changes were added and were then later made into several new versions. As of May 2019, there are a total of three different versions of Bluberry in which will be listed below. At this time, Blueberry does not currently own a fursuit. However, this will change and it will be made around the year 2020 by Bluberry himself.

Bluberry's first design was created by Cyber back in 2019 as this was the first-ever version made for his fursona. A few weeks after this design was released publicly, Cyber decided that there needed to be some major changes and was redesigned into a new version.

That same month that Bluberry announced that Bluberry 1.0 was discontinued, there was a new release called Bluberry 2.0. It contained highly new features and a lot of it stayed the same except that the drawing was more up to date. Bluberry later renamed his 2nd fursona design to Fuzzball after Majira Strawberry, both Cyber and Bluberry's favorite furry YouTuber.

Blueberry 3.0 in which is the current version as of May 2019 was redrawn/traced by Blueberry using a Lighted Tracing Table but still was originally developed by Cyber. Not much was added expect the nose was changed into the LGBT flag instead of his regular nose because not only he is bisexual, but he knows someone personally who works with Bluberry at his school who is in fact gay and wanted to show how being gay is OK and that is who you are.

Brady first joined YouTube on October 11th, 2018 as his own Bee character that was unrelated to the furry fandom itself named HeyItsBee or simply Bee. On this channel, he mostly plays Minecraft and Roblox.[1]

On April 12th, 2019 a channel for Bluberry was created and he aims to create content on his furry channel once his fursuit is completed in 2020.[2]