Bloodfox is a young fox from Sydney, New South Wales, Australia. His nicknames include Blood, Fox, or BitW. 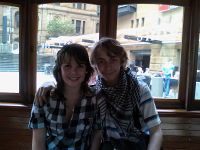 Soon after, he created a profile on the Furstralia forums, and joined the OzFurry mailing list. Between late 2008, and 2009, Bloodfox has become an operator in the Furnet channel, Safehaven.

In the late months of 2009, Bloodfox changed his fursona's name and species. He is now commonly known as Blood, and is a Black Maltese Terrier.

Bloodfox writes his own poetry and song lyrics, and has had some minor experience with musical instruments. Poetry is his way of expressing his deepest feelings, or hatred for someone or something. Many artists have provided him with inspiration, particularly in the area of music. Some of these are: Evanescence, Avril Lavigne, Flyleaf, Marylin Manson, Paramore and Lady GaGa.