From WikiFur, the furry encyclopedia.
Jump to: navigation, search
Culture > Publications > Novels > Blood and Chocolate (novel)
Blood and Chocolate is a romantic supernatural werewolf novel for young adult readers by Annette Curtis Klause. It is set in an alternate universe where loup-garoux secretly live among humans in contemporary America. 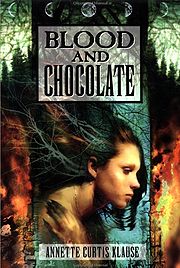 The loup-garoux (pronounced loo garoo) are a separate species from humans, calling themselves Homo lupus. They were humans who were blessed with the power to shapeshift by Selene, the goddess of the moon. This species gains the power to transform into a wolf-like creature at will. (The animal transformation is described to be wolf-like but with longer legs and larger ears, "wolf" was described as simply a convenient term they'd adopted.) The nearer to the day of the full moon, the harder it is to resist transforming, though it can be done at will. On the night of the full moon, however, the loup-garoux must transform. Loup-garoux do not reveal their identity for fear of extinction. Silver usually is fatal to them if it touches an open wound, as it forms a chemical reaction with loup-garoux blood. However, it is mentioned that "anything that will sever the spine will do" in killing a loup-garoux; they are not invincible.

The book starts out with a description from the main character Vivian, a sixteen year old loup-garoux. She explains about her father, the old leader of the pack, and her group of best friends, the Five. The Five consist of Rafe, Finn, Willem, Ulf, and Gregory. They are the only pack members of Vivian's age and their group used to include another boy called Axel. In their old town, the Five started to become more feral, using their wolf forms to scare humans. Vivian was afraid they might betray the pack's secret, but in the end it was Axel who lost control. Axel killed a human girl and someone saw him change back from his wolf form to human after he did it. When Axel was in prison, the Five killed another human to make it look like the "real" killer was still loose, and he was released. Vivian's father killed Axel for endangering the pack, but she pleaded with him to let the Five live. Not long after, a group of suspicious neighbors set fire to the pack's house. Vivian's father, Rafe's mother, and a few others were killed and the pack quickly had to relocate.

A year later, Vivian starts high school in the new town, where she has no friends because of her reserved and secretive nature. Many girls she attends school with find her intimidating and are jealous of her beauty. Yearning for acceptance, she goes after a boy named Aiden who wrote a poem about werewolves that was surprisingly accurate with regard to their transformation. She soon figures out Aiden is fully human, but she is still attracted to him and pursues a relationship in spite of her mother Esmé's disapproval.

It becomes clear that the pack is restless in their new location. Rafe's father Lucien goes around getting drunk and the Five are growing out of control. To Vivian's embarrassment, Esmé and another woman named Astrid, who is also Ulf's mother, are continuously fighting over a man named Gabriel, despite his being twenty-four while they're both in their forties with children. Vivian hates Gabriel because he seems the most likely candidate to take over her father's position as alpha male of the pack. In addition to that, Gabriel is attracted to her and doesn't bother to hide it or listen to her rejections.

When Astrid, Lucien, and a few other pack members run around near the suburbs in their wolf skins, it becomes evident the pack badly needs a leader. Since there is no agreement over who it should be, it is decided to elect the leader in the Old Way. This involved a ceremony called the Ordeal, a free-for-all brawl where any male who is of age can participate. Anyone who has blood drawn is disqualified, the last two left standing can fight to the death if they wish. The winner automatically becomes leader. After he is declared, the pack females can start the Bitch's Dance, a fight to determine who will be the new leader's mate.

Gabriel wins the Ordeal, and Astrid instantly starts the Bitch's Dance by attacking Esmé. While Vivian is watching, it becomes clear that Astrid is out to kill. Without realizing what she's doing, Vivian leaps in to save her mother's life, she seriously wounds Astrid and takes out one of her eyes. However, in doing this Vivian has declared herself Queen Bitch and Gabriel's mate. Once she realizes this she runs away to her home, terrified of Gabriel. The next day Gabriel makes it clear that he'll wait as long as he has to, but eventually Vivian will belong to him and he won't give up on courting her.

The pack thinks Vivian will eventually come around, but she keeps rejecting Gabriel and pursues Aiden with even more effort. When she and Aiden start to get to the point where they might have sex, she decides she wants him to know the truth before they get intimate. When she reveals her beast form to Aiden, he crouches into a corner in fear and starts to throw things at her to chase her away. Hurt and afraid of losing her self-control, she jumps out of his window.

She wakes up in her own bed the next morning, with human blood on her nails and no memory of what happened after revealing herself to Aiden. Later on, watching the news, police describe the death of a man. It seems as though he was killed by a "wild animal." Another murder occurs and again Vivian wakes up with no memory of the incident but finds a human hand on the floor of her bedroom. Sure that she is the murderer, Vivian decides to commit suicide for the sake of the pack. She manages to douse herself in kerosene but before she can light the match she is apprehended by Gabriel, Willem, and Ulf. Willem makes Ulf tell her that his mother, Astrid, and her new lover Rafe were setting her up for the murders. Astrid still carried a grudge against Vivian for winning Gabriel and ripping out her eye in the process, and Rafe was mad at her for acting like a human. They'd committed the murders and put blood on Vivian to make it look like she was the killer.

Earlier, Aiden had sent Vivian a note asking Vivian to meet him "for the sake of what we used to have." Remembering this, Vivian realizes that Astrid and Rafe must have found the note, which was carried by Aiden's friend and the two killers' latest victim. Vivian goes to meet Aiden and try to get him out of danger while Gabriel, Willem, and Ulf go to gather the pack so they can be there when Judgment is passed on Astrid. When Vivian gets to the meeting place, Aiden points a gun at her, explaining he has a silver bullet made from the pentagram that he had once given her. Vivian tries to explain she wasn't the killer, but since Aiden doesn't know there are other werewolves he refuses to believe her. Just as he's about to shoot her, Astrid and Rafe show up in their half forms. Astrid says that they're going to kill both Aiden and Vivian and pretend they "did what they had to do." She also explains that it's mainly because of her grudge over Gabriel that she wanted to do this to Vivian. Rafe didn't realize she meant to kill Vivian and he's hurt when she mentions she wanted Gabriel, and the two of them start arguing. In the middle of it Vivian tells Aiden to shoot Rafe while she leaps for Astrid.

Aiden's shot works and Rafe falls dead. Just as Vivian and Astrid's fight start to get serious, Gabriel steps in and two other pack members apprehend Astrid. Gabriel explains that they have no prisons and no jailers, there is only one sentence for endangering the pack. He then steps forward and snaps Astrid's neck, killing her. Aiden is terrified from seeing so many werewolves and shoots at Gabriel but Vivian leaps in front to take the bullet. After a furious threat from Gabriel, Aiden runs away in terror. The pack's healer manages to get the bullet out but Vivian ends up stuck in her half-form, neither human nor wolf and unable to fully change into either one.

Two weeks later, Gabriel enters Vivian's bedroom, where she is mourning about being trapped between forms. The pack leader explains his past, telling Vivian that he once loved a human whom he ended up killing by accident before he realized they couldn't truly be together. Vivian and Gabriel share a kiss, and Vivian is finally able to transform again. The books ends with Vivian accepting Gabriel as her mate and therefore her position as alpha female of the pack.

The novel was loosely adapted into a film in 2007.

Blood and Chocolate won the 1998 YALSA Award for Best Books for Young Adults.[1]