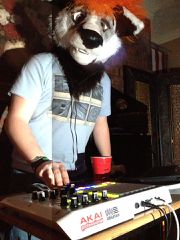 Blondi prepares to DJ in his fursuit

Blondi is an art connoisseur, sound equipment collector, and anthro webcomic fanatic. He is the lead sound engineer for Christ's Freedom Church in Dallas, Georgia. He owns a home studio, and records demo's bi-weekly.

Blondi is engaged to furry artist Toffy Fennecat. He proposed to her on Halloween, and celebrated by going to Fangcon 2013 together.

Blondi became a part of the furry fandom in early 2009, and introduced most of his close friends to it afterwards. His favorite convention is his home convention, FWA. Blondi is owner and operator of a relatively unknown furry netlabel Blondfox Records.

Blondi grew up and led a normal life as a human, and after high school he joined the marines which led to him joining the CIA and was trained as a spy and assassin. After being trained and had shown proficient skill he was picked up by a government funded covert operation with the front SPiN Industries. SPiN hired him from the CIA for his specific skills in killing for a project.

SPiN had discovered a parallel universe of where each and every human on earth had an anthropomorphic doppelgänger. He was sent by SPiN into this parallel universe to find, kill, and bring back anthros to examine. After bringing back a large number of them he underwent genetic modification to become an anthro so he could be a sleeper-cell plant in their society.

After undergoing a full transformation he was sent on his mission, but due to user error on the teleportation device he appeared above a busy street instead of in an ally. He was hit by a car and lost his memory. He now resides in the parallel universe as an anthro, abandoned by SPiN.

The fox died on the red clay, and the medicine man and the fox's spirits were embedded in the riverbank where the fox lay. Many years later the clay was gathered for the making of necklaces. A specific necklace was bought by a boy, and the boy wore the necklace, and while the boy was sleeping, the fox and the medicine man spoke wisdom to the boy, but he heard them as one. The boy had daydreams of the Fox-person and eventually through the power of the boy's thoughts, the spirit became real. Yuumi is the manifestation of these spirits.

Blondi's fursuit of the same name was originally made in early 2010 by Tunny, under his newly formed company TunnySaysIDK, just in time for that year's FWA. The brown neck fur was a later addition by Tunny. Later repairs and upgrades were done by annuthecatgirl, including a new nose, whiskers, eyebrows, new ears, and structural changes.

Blondi wears the fursuit in public on occasion at DJ events, parks, bowling alleys, and at conventions.