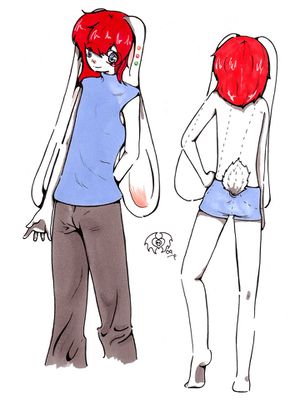 BlixBunny (or alternatively BlixBunneh; born 1983) is a web designer from Preston, Lancashire, England, who is active in the NorthernFurs community[1]. His fursona is a white lapine with long draping ears and a purple marking shaped like a crescent moon around his left eye.

In 2000, Blix moved to Spain with his parents, where he opened an Internet Cafe. The cafe ran from 2001 until early 2005 when he decided that the local politics in the area had made it too difficult to continue.

In 2005, he moved back to the UK where he sought out furries around the Midlands, although it was not until late 2006 that he discovered the NorthernFurs and became active with them.

Since March 2007 Blix has lived in Preston with Hawkey, Kyromouse, Pinky Raccoon, Bee and Nate. In 2008 his character featured in the online slice-of-life comic series Living With You!. In 2008 the Living with you house mates split up into to separate houses but Blix, Hawkey, Bee and Nate still live together.

Blix first discovered the furry fandom back in 1996, but it wasn't until after he had moved to Spain in 2000 that he found out about Furmeets and Conventions. He attended EuroFurence 2008[2].

Blix can be found on Second Life as Inari Rau.