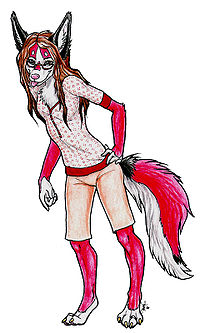 Blaze Husky, born in March of 1987, is a furry artist who lives in Palmyra, Pennsylvania, United States, although she is currently attending Kutztown University for Art Education.

Blaze first showed up on the internet on Xanga, c. 2003. After stumbling across deviantART soon after, she began posting her works of furry art there, in the hopes of receiving more creative feedback.

Since 2003, her artistic abilities have developed with the influence of her favorite anthropomorphic artists (including Huskie, Golden Wolf, Kyoht, Sidian and Black Riot).

At first, her art was very similar to her artistic influences, but she has since developed a unique style of her own.

fursona: Blaze, is a 5'4", 110 lbs. husky, created in 2003 and the same age as her creator. She chose the husky breed because they are her favorite domesticated dog, and she felt her personality was very similar to this determined, loyal creature. She also loves their appearance.

Blaze's markings are unique as they cannot typically be found on a husky. Being her favorite color, Blaze is primarily red, but has a black "saddle-like" marking on her back with a white blaze in the middle. She also a red blaze on her nose, which, unlike the majority of husky furries, is pink, as are her paw pads.

Blaze loves fluffy long tails and canine ears, and, as she does in works depicting other people's fursonas, she tends to exaggerate these features on Blaze.

Despite what some people think, the name "Blaze" does not come from her love (or lack-thereof) of fire or smoking weed, but from the markings she has chosen.

Blaze's personality, likes/dislikes, and humanoid looks are parallel with her creator's. She is currently mated to the dhole, Tonic, her creator's current real-life mate since April 2005. Tonic is also one of her artistic creations.