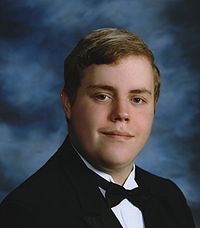 Blaze Edman Black, born on February 18, 1988 in Spring Branch hospital in Texas to his parents, Jackie L. Black and Doyle Black. He is the younger of two kids. At an early age, he was diagnosed with Aspergers, Attention-deficit hyperactivity disorder (ADHD), and Hypothyroidism, and now has type 2 diabetes.

During Pre-K and Kindergarten, he attended Jowell Elementary. Near the end of kindergarten, his family moved a short distance away. When he started first grade at Sheridan elementary, he immediately showed an aptitude for math and science, later balanced out when his grades in reading and language classes started to lag behind. His social life with the other kids was not too great; he was teased and bullied.

All throughout his elementary experience, he participated in Cub Scouts.

Thornton Middle School, although not a pleasant experience for him, was the scene of a major turning point in his life. After making trouble and good grades in middle school, it was time for him to enter high school at Cypress Springs High School. His freshman year, he joined the Air Force Junior Reserve Officers' Training Corps (AFJROTC), originally to get the credit for his two years of required physical education. Once he was in the corps, something attracted him back for all four years, eventually reaching the position of Corps Civil Engineer Commander and the rank of Cadet Technical Sergeant in his fourth and final year of the program. Under the command of Major Wanda Ewing (ret) and SMSgt William Hardy(ret) of the USAF, he was reformed towards being a better citizen, as in the AFJROTC mission statement.

He plans to graduate recommended on May 27, 2006 with between a 4.0 to a 5.0 GPA (on a 6.0 scale). After he graduates from high school, he plans to attend Tarleton State University in the fall semester of 2006 but due to lack of funding, he may have to go to Cy-fair community college.

a week before graduation from cypress springs high school, he finally admitted to himself that he was gay after many, many years of denial and homosexual actions since first grade. he graduated on time with the rest of the class of '06, graduating on the "recommended" plan which was optional at the time he went to school there. after the summer was over, he went to tarelton university like he had planned. when he got there, he found the atmosphere of the college and small town of stepehnville around it quite more oppressive than he was used to, though being away from his overprotective parents felt quite freeing and good. he was doing okay in some of his classes, and hanging on to the edge with his claws in other classes until a bunny pet/friend of his came to visit him at his dorm. while snuggling this bunny early in the morning, he decided to stay in for an extra hour, which meant he skipped one class. missing that one class threw him off his paces and caused him to think it was okay to miss some classes. this effectively uprooted his claws and started his downward spiral of education. he dropped out of many of his classes at tarlton, but forgot to turn in the withdraw papers, which messed up his grades at the end royally. he moved back to his room in his parents house and attempted to go to the local community college, cy-fair college now called lonestar college, but failed there as well. he currently resides with his parents, constantly attempting to obtain that freedom he tasted while he was away, but gets put down in his place by his over-protective parents.

after he realized that his semester at tarlton was unsalvageable, he was able to attend furfright '06 where he met the furry musical artist Flare Starfire. he also made it to furfright '07, and went to AC '08 with his first serious love and mate, who broke up with him there. they are still friends and still love each other, even after his ex's 5 months away in Minnesota.

During early 2006 his sister, Brandie Black a nekkojin character, stumbled across a mass multiplayer game called Second Life. Blaze signed up as Gamemaster Carroll and while playing made contact with a furry. He became interested in the life of furs, and started researching the topic. He realized that being a furry fit his life and interests, and he was quickly assimilated into the furry fandom on Second Life. As time went by, he became known as Gamemaster Carroll, the Second Life furry. 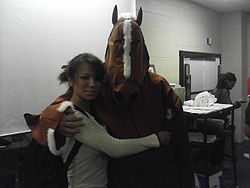 An opportunity to carry his love of furries to real life arose when a school government project called for a horse. He jumped on the chance, and he had his mother make his first fursuit. From then on, he chose to be a fursuiter, going to random places in his first fursuit.