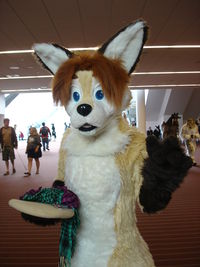 Blarion's fursuit was constructed by Mango Island Creations,[2] and debuted at FA: United 2010.

Blarion is alleged to have been born sometime in the past of Harrow's world, Eden.[citation needed] He was orphaned at an early age and quickly rose to power through a series of enterprising business decisions, before abandoning his ways as a powerful businessfenn and took up a simple life outside of the mainstream. His only son, Mr. Ruddabegga, although discouraged from the realm of business, started a company that entertained the masses of the satellite colony of Tinseltown, where it is always Christmas.

The company's safety record left a lot to be desired after numerous employee deaths and reports of extremely low employee morale, although no charges were ever filed due to insufficient evidence. The company never fully recovered from the bad press and slowly sunk out of view of the public eye, and the current status and whereabouts of Ruddabega are unknown.