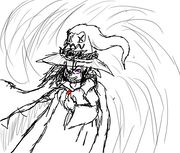 Black Mage Kitty is a lynx character created by JD-W (born 1989), one of his first characters. JD-W attended Furnal Equinox 2010.

The character, known to be named J'Ark at times, was born around the 1300's, into a royal family of mages, whom were feared, because of their power.The powerful king Azardath, J'arks father, was the most feared being of his time, ruling his kingdom with a fist that could kill gods. People, mostly heroes of other kingdoms, tried to kill the king , but all was for naught. The only thing that could of killed him was age..But he was too stubborn to go down.

The king made a pact with the devil to preserve himself and his family over the centuries to come. The only setback to the deal was that he would forever remain a corpse like figure, easily killable with a steak through the heart. J'ark, whom was 16 when his father made the deal, lived on almost like a vampire. Never aging. Never getting sick. Never close to death.

Now, in the 2000's, he's kept his identity a secret from the world, under the alias of Black Mage Kitty, also known as BMK. He however dreads the day that somebody would find his father and kill him, thus bringing his cursed life to an abrupt end...But for now, he roams the earth.