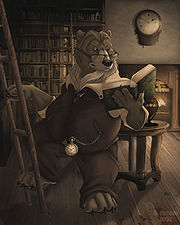 Bjorn Grafeldr (born October, 1965) resides in El Dorado Hills, California, U.S.A. He is employed as a property and casualty underwriter for a major insurance firm. In his spare time, he dabbles in photography, videography, and fiction writing. His fursona is a European Brown Bear.

Before he took on his fursona, Bjorn was an active participant in the comic book and science fiction/fantasy fandoms from 1979 to 1988. This included witnessing the beginnings of what was to become the current-day furry fandom. Bjorn drifted away from the fandom, turning his focus instead to personal, scholastic and professional development. He discovered the present-day fandom in November of 2007 when searching for information on the Disney film The Adventures of Ichabod and Mr. Toad. Feeling there was a need to stimulate his creativity and meet others who shared the same interests, he adopted the Bjorn Grafeldr fursona a month later and became an active participant in several on-line furry communities.

Bjorn Grafeldr, whose name translates in English to "the grey cloaked bear" is the protagonist in a story currently under development. In this story, the character is a synthetic construct housing the souls of a recently deceased human and bear. The form this character takes is that of a anthropomorphic mocha-colored brown bear with light grey markings on his muzzle, around his collar and down his back. Discovering others like him exist, he agrees to work with them to discover the mysteries of their origins at a privately funded think tank in Norway. 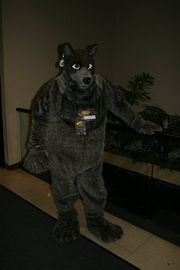 The Bjorn Grafeldr fursuit was completed by Soki Twopaw on July 24, 2010. Bjorn debuted the suit at FurFright 2010. In a LiveJournal entry dated August 13, 2010, Bjorn mentions he views the suit as his "Dress Uniform" for his character.

The Hunt fursuit was completed by Roofur Fursuits and Accessories on January 3, 2012. Hunt, short for Dr. Lemuel Quincy Huntington, is a Polar Bear often depicted as wearing torn scrubs, black leather jacket, and a ragged bandana. Hunt made his first appearence at Further Confusion 2012. 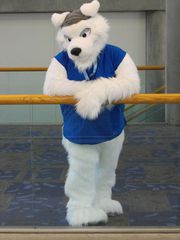 Bjorn is an active member and participant on several LiveJournal communities, most notably   hockeyfurs and   greymuzzle.