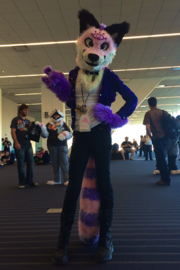 Bismol, also known as Bizzy, is an artist, fursuiter, and fursuit-maker from Virginia, USA.

While she has been interested in anthropomorphics for most of her life, she did not officially join the fandom until 2009. She was a popular user on the Vine app under the username "Bizzy", is an active Fur Affinity user, and posts a majority of her artwork - as well as fursuiting photos - on her Instagram account, which recently been deactivated. She also has a youtube account called "Bismol Cheshire Fox" where she posts videos related to the fandom.

Bizzy's first fursona and fursuit was a generic blue fox named Modry, who came to be around in early 2010. In 2013, she retired Modry and knighted one of her secondary characters, a "Cheshire fox"[1] named Bismol, as her official fursona.

Early on in the character's development, Bismol's original fur colors were bright pink and orange, but soon her orange markings were changed to purple and later added a third eye (inspired by the popular podcast "Welcome to Night Vale").

Since this article was created,[when?] she has updated her fursuit head.[clarify]