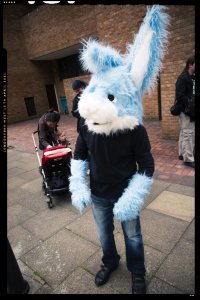 BhavFox, also known as BhavpFox, is an artist and fursuiter who lives in London, England. His fursona is a toony red fox.

When not holding down a full-time job, he is also a global administrator on UKFur and channel operator for #londonfurs IRC on Furnet.

BhavFox has attended the following:

In 2009, BhavFox commenced construction of his first fursuit - a partial of a blue bunny[2], which was finished in August 2010[3] . A completed fullsuit of the bunny was unveiled at ConFuzzled 2011.