Between Darkness and Light

From WikiFur, the furry encyclopedia.
Jump to: navigation, search
Culture > Publications > Novels > Between Darkness and Light 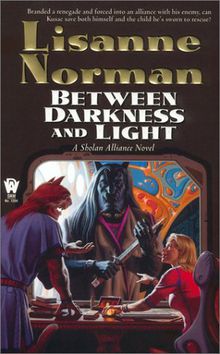 Between Darkness and Light is the seventh book of the Sholan Alliance Series, written by Lisanne Norman. Although they are best classified as science fiction, they also include elements of fantasy and romance. Many of the main characters are telepaths, which is one of the major elements of the series. Between Darkness and Light was the winner of the Best Anthropomorphic Novel category at the 2003 Ursa Major Awards.

In league with the enemies -

In the midst of unrest on his home world of Shola, Kusac has chosen to undertake a secret mission of which only those in the highest echelons of the Brotherhood are aware. And even they are not privy to all the information Kusac has uncovered, nor all the plans he has made

Carrie and Kaid have not been told the truth. So when Kusac feels Shola, seemingly abandoning his responsibilities, his Triad, and his clan, Carrie is devastated and Kaid is furious. Yet Carrie will not give up on Kusac, certain he will one day return to explain his actions.

But whether Kusac and his elite team can actually accomplish their mission and escape with their lives remains to be seen. For to achieve their goal they must rendezvous with the Valtegan general who is Kusac's archenemy in hopes of rescuing Kusac's young son. But even if he succeeds - branded rebel by his own people, struggling to deal with the new powers he scarcely understands, and caught between the machinations of his own god and those of a secret and ancient alien organization - can Kusac hope to regain all that he has lost on Shola?