Bethellium is an action and adventure webcomic drawn and written by A Blue Deer. It is hosted on Dark Blue Comics as well as being co-hosted on Kemono Café.

Chapter One (Cover through Page XX)[edit]

Three delegates travel to Zoana’s residence to persuade her to live in Bethellium, a magical city. Skeptical at first due to the extinction of magic, Zoana accepts the invitation on the conditions that she can teach whomever she likes and that everything in her residence will be delivered to the promised new laboratory. Upon their departure, the delegates give Zoana a map to Bethellium and a safe pass through Roselynn Kingdom.

The next day, Zoana head out to find the magical city but is having difficulties finding it. Tired, she rests until she hears Elle singing. Upon their meeting, Elle escorts Zoana across a bridge to Bethellium. During their time on the bridge, it is revealed that Bethellium is a magical kingdom that was created as a refuge to all magic users after the last war. Upon entering the city, Elle reveals that the bridge ask as a teleporting device with the use of spirit gates and aura identification.

Kathernine welcomes Zoana and escorts her to the castle, dismissing Elle in the process. Not one for small talk, Katherine and Zoana ride the elevator up in silence. Once they reach their desired floor, Gale, Grandmaster Melos’s attendant and butler, introduces himself and explains the true nature of her employment: to cure Grandmaster Melos of a mysteriously and magical illness. Upset that her laboratory and residence is contingent on her success, Zoana agress to help after listening to Gale’s plea.

Later, after examining Grandmaster Melos, Zoana heads off to gather the necessary materials; however, Katherine insists that she comes along. After a brief argument and Elle’s interruption, Katherine agrees to stay behind. When they leave the castle, Elle introduces Zoana to Auri, her friend. 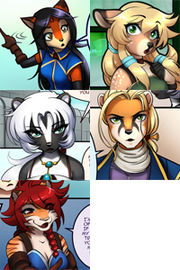 Zoana, a fox, is the primary protagonist in Bethellium. A reclusive alchemist in the middle of the woods, she is renowned for her skills and accepts the proposal to live in Bethellium. She is headstrong and tends to have a tendency to talk to herself. Gale reveals her full name as Zoana Aufehurst of Paian.

Elle, a doe, is a bashful Shaman that enjoys signing.

Katherine, a skunk, is an arch mage in Bethellium. Despite her harsh demeaner and straightforwardness, she is rather shy, keeping to herself rather than engaging in small talk.

Sonette is a rabbit,

Gale is Grandmaster Melos’s attendant and butler. He is rather polite.

Auri is a tiger and is Elle's friend.

Grandmaster Melos is the founder of Bethellium who has fallen ill to a mysterious and magical illness.