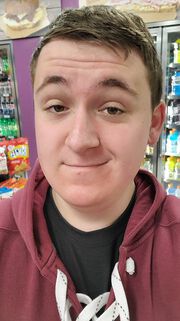 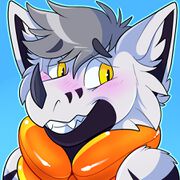 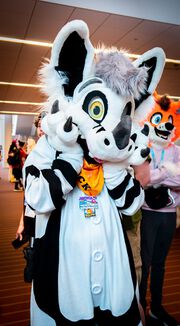 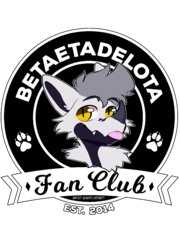 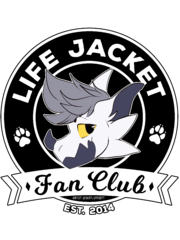 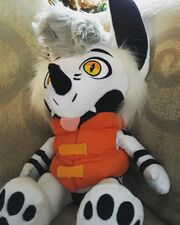 BetaEtaDelota Plushie made by Corgi Beans 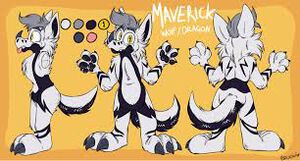 BetaEtaDelota or simply Beta (born January 3, 1998) is a furry fan and YouTuber from Massachusetts, USA. Beta also maintains an active Twitter presence with 18,000 Followers as of July 2019.[1]

BetaEtaDelota's primary fursona is mainly white with black fur patterning anthropomorphic Wolf Dragon named Maverick. It had been redesigned and rebranded in the summer of 2018 to what it can be seen as today, and had been inspired by the previously design of the Hackmon Digimon, but is no longer a Digimon.[2]. Maverick can be seen wearing different clothing based on the season and situation, during fall Maverick wears a burgundy red Letterman jacket, and a grey fleece-lined hoodie for the winter season, but Maverick still retains his normal red cloak (similar to what hackmon has), and he also has two lifejackets. Previously BetaEtaDelota's fursona was based on a hackmon (a hackmon being a dragon type Digimon).[3] Maverick was initially named Cyye but this was soon changed as Beta found Maverick much cooler. Maverick also went through several design revisions as many were mistaking him for a wolf or a robot rather than a dragon he is. Like all of Beta's fursonas - Maverick features a bright orange(sometimes red), plump, life jacket. Sometimes the lifejacket also overinflated.

BetaEtaDelota also has another fursona, a blue Veemon -another form of dragon type Digimon. Cyye was given his name after Beta chose to change the name of his primary fursona to Maverick.

BetaEtaDelota got his fursuit on July 2019. The suit was made by More Fur Less Inc.

Before his current YouTube channel (BetaEtaDelota), Beta had another channel focused mainly on gaming content and commentary.

On the 12th of February 2018, Beta announced that the focus of his channel was changing with a shift away from purely furry based content to content he wanted to produce such as Fornite gameplay.[6] He stressed that he was still very much a furry but rather than producing purely furry based content - he would produce one topical furry video for three videos that he wanted to make.

However on the 6th of March 2018, less than a month later from the video announcing a change in focus, Beta posted a YouTube video regarding his first furry convention following Antrho New England 2018 explaining that the experience changed his life.[7] In this video, Beta detailed the life-changing experience of meeting his first YouTube fans as well as Majira Strawberry.

Prior to this meet Beta considered himself the "Kephrii" of the furry community, as in a "toxic" figure who is popular but disliked by the mainstream community, however meeting Majira as well as his overall experience at the convention changed his view on himself, the fandom, and how he relates to it. Beta stated in this video that his experience at Anthro New England 2018 saved him from a really dark place in his life.

Following the events of Anthro New England, 2018 of the content on Beta's channel has been primarily focused on the furry fandom with topics ranging from conventions he has attended to things of note within the fandom.