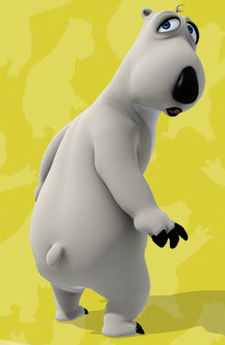 Bernard (in korea: Backkom) is a series about a a curious polar bear (without hair), travels the world turning even the simplest thing into a funny but difficult challenge. this series, co-produced by BRB, it's creative studio Screen 21, EBS, M6 and RG Animation Studios. created in 2005, It has 52 episodes each runs at 3 minutes.

BERNARD tells the misadventures of a strange and rather clumsy polar bear, whose naivety and inexperience make his investigations into our world highly original. For Bernard, simple things like taking a picture, sheltering from the rain or playing golf without cheating, soon turn into major challenges