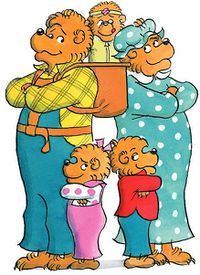 Works from the series have been released in both book form and as an animated series on the Public Broadcasting System (commonly known as PBS). Targeted at young children, it features a cast entirely consisting of anthropomorphic bear characters. The series focuses mostly on educational values, sometimes reciting the lesson learned as a moral of the story.