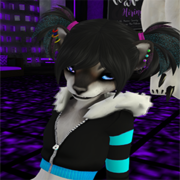 Bengt, also known as Princess Bengt and Bengt McDiddles, moogaspectrum on Second Life, is a furry artist and an active user of Second Life who is most known for his adult videos recorded there.

Bengt's fursona is a raccoon, described as "thicc"; and usually presents as a femboy. The most defining characteristic about Bengt are the colour of his genitals, which are a neon blue colour.

Although Bengt's hair often changes, the common themes are the neon pink and neon blue highlights present in it.

Before making videos on his own, Bengt was also a member of SyrusMax Inc. where he participated in several comics (which are only available in Second Life at the studio headquarters), as well as a video with ShineSL, under a different name. Bengt made comics under the SyrusMac Inc. satellite branch called Rainbow Club, which was supposed to specialize in LGBT themed comics, but after their first comic, the Rainbow Club was permanently dissolved.

After SyrusMax Inc. dissolved the first time, Bengt joined GenFur Studios, and starred in a video with Nox,[1] but shortly after left GenFur Studios due to disagreements with the management of the studio.

Bengt is most known for his adult videos which he films in Second Life. All of his videos at the time of this writing have been male on male and focus on no specific fetish but rather themes, such as club, beach, etc. Bengt has starred in all of his videos except for "Breaking A Sweat"[2] which he directed and produced, and appeared as a background actor.

Bengt used to distribute his videos online under the "OwO Studios" name, but recently dropped it to distribute them on his own.[7]