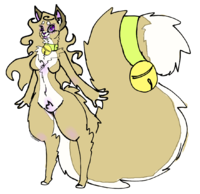 Meowban, also known as Nephels or Sinopa, is an amateur furry artist. The name "Meowban" comes from the "Meowban Brothers" or "Nyaban Brothers", the protectors of the Black Cat Pirates from the manga One Piece.

Meowban's artwork can be found on several websites, ranging from Fur Affinity to Fiend's Fridge.

Meowban's fursona, Bells Candy or Candy Bells, is a fluffy house cat with coffee-colored and a creamy underbelly with brown pinstripes outlining it. Her underbelly colour extends under her tail to its tip.